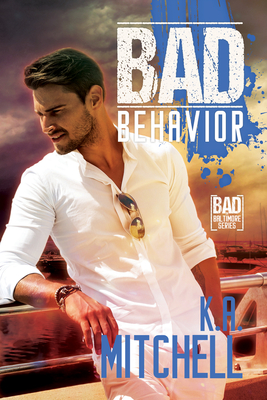 This is book number 5 in the Bad in Baltimore series.

In a lifetime of yes, no is the sexiest word he’s ever heard.
After one too many misunderstandings with the law, wealthy and spoiled David Beauchamp finds himself chained to the city by the GPS and alcohol sensor strapped to his ankle. Awaiting trial, cut off from usual forms of entertainment, he goes looking for a good time—and winds up with his hands full, in more ways than one. The situation only gets more complicated when he’s summoned for a random drug test and comes face-to-face with the dominant man who took him for one hell of a ride the night before.

Probation Officer Tai Fonoti is used to handling other people’s problems, but he’s horrified when one of the extra clients his boss dumps on him is the sweet piece of ass he screwed the night before. It makes getting a urine sample a pretty loaded situation. Tai’s unique brand of discipline has Beach craving more. But while Tai relishes laying down the law in the bedroom, the letter of the law stands between them and kinkily ever after….
K.A. Mitchell discovered the magic of writing at an early age when she learned that a carefully crayoned note of apology sent to the kitchen in a toy truck would earn her a reprieve from banishment to her room. Her career as a spin-control artist was cut short when her family moved to a two-story house and her trucks would not roll safely down the stairs. Around the same time, she decided that Ken and G.I. Joe  made a much cuter couple than Ken and Barbie and was perplexed when invitations to play Barbie dropped off. She never stopped making stuff up, though, and was thrilled to find out that people would pay her to do it. Although the men in her stories usually carry more emotional baggage than even LAX can lose in a year, she guarantees they always find their sexy way to a happy ending.