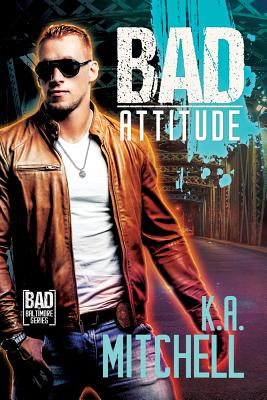 This is book number 3 in the Bad in Baltimore series.

Saving lives never used to be this complicated.

Gavin Montgomery does what’s expected of him by his wealthy and powerful family—look good in a tuxedo and don’t make waves. When a friend takes a leap off a bridge, Gavin tries to save him, only to fall in with him. At least at the bottom of the river he won’t feel like such a disappointment to his family. But he’s pulled from the water by a man with an iron grip, a sexy mouth, and a chip on his shoulder the size of the national deficit.

Jamie Donnigan likes his life the way it is—though he could have done without losing his father and giving up smoking. But at least he’s managed to avoid his own ball and chain as he’s watched all his friends pair off. When Montgomery fame turns a simple rescue into a media circus, Jamie decides if he’s being punished for his good deed, he might as well treat himself to a hot and sweaty good time. It’s not like the elegant and charming Gavin is going to lure Jamie away from his bachelor lifestyle. Nobody’s that charming. Not even a Montgomery….
K.A. Mitchell discovered the magic of writing at an early age when she learned that a carefully crayoned note of apology sent to the kitchen in a toy truck would earn her a reprieve from banishment to her room. Her career as a spin-control artist was cut short when her family moved to a two-story house and her trucks would not roll safely down the stairs. Around the same time, she decided that Ken and G.I. Joe made a much cuter couple than Ken and Barbie and was perplexed when invitations to play Barbie dropped off. She never stopped making stuff up, though, and was thrilled to find out that people would pay her to do it. Although the men in her stories usually carry more emotional baggage than even LAX can lose in a year, she guarantees they always find their sexy way to a happy ending. K.A. loves to hear from her readers. You can email her at ka@kamitchell.com. She is often found talking about her imaginary friends on Twitter @ka_mitchell. Email: ka@kamitchell.com Twitter: @ka_mitchell Website: www.kamitchell.com Blog: authorkamitchell.wordpress.com Tumblr: kamitchellplotbunnyfarm.tumblr.com