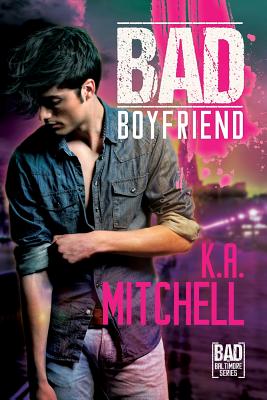 This is book number 2 in the Bad in Baltimore series.

Causing trouble has never been more fun. Eli Wright doesn’t follow anyone’s rules. When he was seventeen, his parents threw him out of the house for being gay. He’s been making his own way for the past five years and he’s not about to change himself for anyone’s expectations. For now, romance can wait. There are plenty of hot guys to keep him entertained until he finds someone special.

Quinn Maloney kept the peace and his closeted boyfriend’s secrets for ten years. One morning he got a hell of a wake-up along with his coffee. Not only did the boyfriend cheat on him, but he’s marrying the girl he knocked up. Inviting Quinn to the baby’s baptism is the last straw. Quinn’s had enough of gritting his teeth to play nice. His former boyfriend is in for a rude awakening, because Quinn’s not going to sit quietly on the sidelines. In fact, he has the perfect scheme, and he just needs to convince the much younger, eyeliner-wearing guy who winks at him in a bar to help him out. Eli’s deception is a little too good, and soon he has everyone believing they’re madly in love. In fact, he’s almost got Quinn believing it himself....

K.A. Mitchell discovered the magic of writing at an early age when she learned that a carefully crayoned note of apology sent to the kitchen in a toy truck would earn her a reprieve from banishment to her room. Her career as a spin-control artist was cut short when her family moved to a two-story house and her trucks would not roll safely down the stairs. Around the same time, she decided that Ken and G.I. Joe made a much cuter couple than Ken and Barbie and was perplexed when invitations to play Barbie dropped off. She never stopped making stuff up, though, and was thrilled to find out that people would pay her to do it. Although the men in her stories usually carry more emotional baggage than even LAX can lose in a year, she guarantees they always find their sexy way to a happy ending.

"BAD BOYFRIEND is a fast-paced, entertaining romance with red-hot love scenes and two heroes who are sure to win readers’ hearts. I adored this book, and I can’t wait to re-read Eli and Quinn’s story soon!" —Wit and Sin