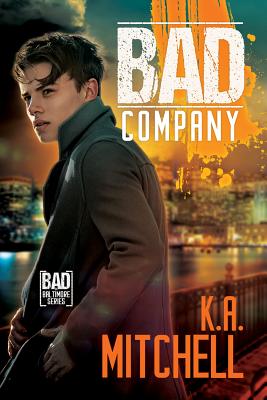 This is book number 1 in the Bad in Baltimore series.

Some things are sweeter than revenge.

“I need a boyfriend.” Hearing those words from his very straight, very ex-best friend doesn’t put Nate in a helpful mood. Not only did Kellan Brooks’s father destroy Nate’s family in his quest for power, but Kellan broke Nate’s heart back in high school. Nate thought he could trust his best friend with the revelation that he might be gay, only to find out he was horribly wrong and become the laughingstock of the whole school. Kellan must be truly desperate if he’s turning to Nate now.

Kellan’s through letting his father run his life, and he wants to make the man pay for cutting him off. What better way to stick it to the bigot than to come out as gay himself—especially with the son of the very man his father crushed on his quest for money and power. Kellan can’t blame Nate for wanting nothing to do with him, though. Kellan will have to convince him to play along, but it’s even harder to convince himself that the heat between them is only an act...

K.A. Mitchell discovered the magic of writing at an early age when she learned that a carefully crayoned note of apology sent to the kitchen in a toy truck would earn her a reprieve from banishment to her room. Her career as a spin-control artist was cut short when her family moved to a two-story house and her trucks would not roll safely down the stairs. Around the same time, she decided that Ken and G.I. Joe made a much cuter couple than Ken and Barbie and was perplexed when invitations to play Barbie dropped off. She never stopped making stuff up, though, and was thrilled to find out that people would pay her to do it. Although the men in her stories usually carry more emotional baggage than even LAX can lose in a year, she guarantees they always find their sexy way to a happy ending.

"An entertaining, emotional, sometimes funny, oftentimes sensual story with two likable MCs, enough conflicts to make it interesting, also some complications and angst for those who like them." —Love Bytes