Monastery Mornings: My Unusual Boyhood Among the Saints and Monks (Paperback) 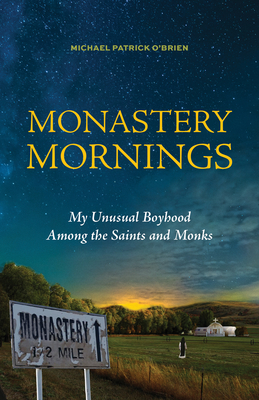 Monastery Mornings: My Unusual Boyhood Among the Saints and Monks (Paperback)

A love letter to a community of Trappist monks who provided family when it was needed the most.

This warmhearted memoir describes how a small, insecure boy with a vibrant imagination found an unlikely family in the company of monks at Holy Trinity Abbey, in the mountains of rural Latter-day Saint Utah. Struggling with his parents' recent divorce, Michael O'Brien discovered a community filled with warmth, humor, idiosyncrasies, and most of all, listening ears. Filled with anecdotes and delightful "behind the scenes" descriptions of his experiences living alongside the monks as they farmed, prayed, buried their dead, ate, and shared the joys of life, Monastery Mornings speaks to the value of spiritual fatherhood, the lasting impact of positive mentoring, and the stability that the spiritual life can offer to people of all ages and walks of life.

Michael Patrick O’Brien is a Catholic writer and lawyer living in Salt Lake City. He wrote for his college newspaper while earning a Government/Theology degree from the University of Notre Dame. He wrote movie reviews during law school at the University of Utah. Mike is a partner at the law firm of Jones Waldo Holbrook & McDonough. He advises business clients on employment issues and represents many news media outlets on various First Amendment and publication matters. He is married to Vicki, a preschool teacher, and they have three adult children. Learn more about him at theboymonk.com.

“Since their 1947 arrival in Huntsville, the Trappist monks have had a profound impact on the Utah community. Their lives of prayer, simplicity, hard work, and hospitality brought their monastic traditions to the people of our state and made a great difference in so many lives. In this thoughtful memoir, Michael Patrick O’Brien makes sure the legacy of the Trappists will remain, despite the closure of their monastery in 2017. His experience living with the monks as they prayed and sang the Divine Office, worked in the fields or their small gift shop had an impact that supported him emotionally and spiritually in difficult times. This is a tribute to Utah’s Trappist monks and a reminder of their positive influence on Michael O’Brien and numerous others during their presence here.” —The Most Reverend Oscar A. Solis, DD, Bishop of Salt Lake City

“Michael Patrick O’Brien writes, ‘For me, one of the light’s most recognizable garments is the simple black and white robe of a monk, and the light’s ever soothing embrace is the sweet memory of my monastic mornings.’ In that sentence, he sums up his decades-long adventure with the spirited monks of Holy Trinity Abbey, a Catholic oasis in the middle of Utah's Mormon country. He was fortunate to come of age under the tutelage of Trappist monks, and to enjoy close relationships with men who choose the search for God over the more mundane lures of the world. O’Brien began visiting Holy Trinity in 1972 at the age of 11 at his mother's urging following his parents’ divorce. The abbey remained a constant in his life until its closure in 2017. This beautiful memoir portrays his monastic friends as both exceptional and ordinary, holy and all-together human. In doing so, O’Brien reminds those of us who have been hanging on by our fingertips why we still love the Catholic Church and what it is called to be: a place of service and mercy. A place where, like Holy Trinity Abbey, the core message is love.” —Judith Valente, co-author of How to Be: A Monk & A Journalist Reflect on Living & Dying, Purpose & Prayer, Forgiveness & Friendship

“Monastery Mornings is as much a memoir about a sensitive Irish American boy’s journey into manhood as it is an unabashed love letter to Huntsville, Utah’s beloved Trappist monastery. O’Brien’s detailed history of the monastery and endearing portraits of the monks who helped raise him provide a compelling backdrop to a compassionate, brave personal narrative that both amuses and inspires.” —Jennifer Napier-Pearce, former executive editor, The Salt Lake Tribune

“The author of this charming volume combines his life’s story with that of the famous Utah Trappist monks. A consummate storyteller, O’Brien shares his remarkable journey by weaving the tale of the Abbey of the Holy Trinity monks with his own search for a life of belonging and meaning. The final result is as entertaining as it is enlightening. An extraordinary contribution and achievement.” —Br. Columban Weber, OCSO, Abbey of Gethsemani

“In July 1847, Mormon pioneers famously arrived in Utah. A century later in July 1947, some Catholic pioneers followed in their footsteps: Trappist monks bent on creating a contemplative monastery, Holy Trinity Abbey, in the unlikely soil of Mormon country. In this affectionate, winning memoir, Michael O’Brien captures the expansive spirit of late twentieth-century Catholicism in America and the loving warmth of the monks who befriended him.” —Jana Riess, author of Flunking Sainthood and The Next Mormons