The Mystery of Faith: Meditations on the Eucharist (Paperback) 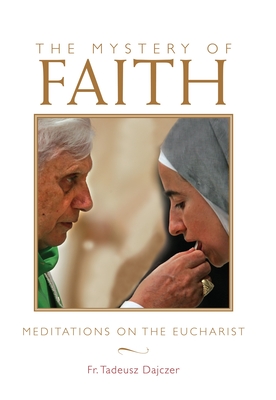 The Mystery of Faith: Meditations on the Eucharist (Paperback)


Not On Our Shelves—Ships in 1-5 Days
Would you like to not just go to Mass, but learn to live the Eucharist?

Now comes a clear and compassionate voice of encouragement, reflection, and inspiration.

“I am really shaken when I begin to realize that in the palm of my hand is the one true God who rules the world, the One upon whom every nerve and tissue depends. Finally I may get to see that He allows me to adore Him in the palm of my hands at least for a moment as He only has me. He only has me. I am everything for Him. I need Him to be everything for me. He comes to me in an unexpectedly riveting way. I try to respond to these unusual words of His love. After all, I have nothing, nobody; truly I have only Him. If I lost Him, I would not be able to live.”

First appearing in its original Polish in late 2007, The Mystery of Faith is now available in the US, England, Russia, Lithuania, Germany, and Italy. This book is impacting Catholic spirituality all over the world.
The Reverend Tadeusz Dajczer is a Polish priest and the author of The Gift of Faith (known also as Enquiring Faith), which has been published in 102 editions all over the world since 1992, translated into twenty-eight languages, with more than 160,000 copies sold. Japanese and Bikol translations are in preparation, now. Fr. Dajczer graduated from the theological faculty in Warsaw. Later he studied at the Pontifical Gregorian University in Rome where he received his DD. For many years he worked as a professor at the Academy of Catholic Theology and the University of Cardinal Stefan Wyszynski in Warsaw. In 1994, he received the professor’s title of theological sciences from the President of Poland.