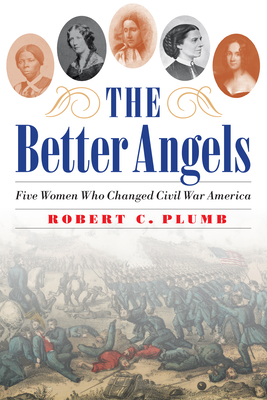 
Not On Our Shelves—Ships in 1-5 Days
Harriet Tubman, Harriet Beecher Stowe, Clara Barton, Julia Ward Howe, and Sarah Josepha Hale came from backgrounds that ranged from abject enslavement to New York City’s elite. Surmounting social and political obstacles, they emerged before and during the worst crisis in American history, the Civil War. Their actions became strands in a tapestry of courage, truth, and patriotism that influenced the lives of millions—and illuminated a new way forward for the nation.

In this collective biography, Robert C. Plumb traces these five remarkable women’s awakenings to analyze how their experiences shaped their responses to the challenges, disappointments, and joys they encountered on their missions. Here is Tubman, fearless conductor on the Underground Railroad, alongside Stowe, the author who awakened the nation to the evils of slavery. Barton led an effort to provide medical supplies for field hospitals, and Union soldiers sang Howe’s “Battle Hymn of the Republic” on the march. And, amid national catastrophe, Hale’s campaign to make Thanksgiving a national holiday moved North and South toward reconciliation.

Robert C. Plumb is a writer, marketing consultant, and former marketing executive for two Fortune 500 companies. He is the author of Your Brother in Arms: A Union Soldier’s Odyssey and has written for the Montgomery County Historical Society’s journal, the Washington Post, and the Washington Post Magazine. He lives outside Washington, DC.

Elisabeth Griffith is the author of In Her Own Right: The Life of Elizabeth Cady Stanton and a contributor to Ken Burns’s documentary Not for Ourselves Alone: The Story of Elizabeth Cady Stanton and Susan B. Anthony.
“All of these extraordinary women did a great deal in the causes of freedom, women’s rights, and literary excellence, as Robert Plumb makes clear in this fine group biography of five women who truly did change the course of American history.”—James M. McPherson, Pulitzer Prize–winning author of Battle Cry of Freedom: The Civil War Era

“There couldn’t be a better time for America to find its better angels, and Robert C. Plumb’s lucid and admiring portrait of five exemplary women is just the ticket. You’ll find corners of American history your old textbooks never told you about, and once you’re done, you’ll want to pass it on to the next generation.”—Louis Bayard, author of Courting Mr. Lincoln and The Pale Blue Eye

“Robert Plumb has placed five remarkable women on the center stage of the American Civil War. Their compelling stories are told with perception and freshness in this inspiring work of women’s history.”—Robin G. Schulze, editor of Becoming Marianne Moore and author of The Degenerate Muse

“Few realize the scope of what these remarkable women overcame and accomplished during their long, productive lives. . . . The Better Angels had great impact in their own time but also helped advance issues that benefited society in future generations. From them readers can learn lessons of courage, determination, creativity, and resourcefulness to make a difference in today’s world.”—Marilyn Southard Warshawsky, author of John Franklin Goucher: Citizen of the World


“The Better Angels weaves together the stories of five extraordinary women whose talents won scope and recognition in the struggle to end slavery that led to the Civil War. As skillfully told by Robert Plumb, their stories illustrate the measure of liberation that some women were able to seize through that brutal conflict.”—David O. Stewart, best-selling author of Impeached: The Trial of President Andrew Johnson and the Fight for Lincoln’s Legacy and George Washington: The Political Rise of America’s Founding Father


“A clear, compelling introduction for readers not steeped in the history of the American Civil War. Robert Plumb doesn’t just chart clashes and body counts. He humanizes the conflicts that tore the country apart, focusing on the home front as well as the front lines. His story unfolds through the perspective of five women [whose] lively group portrait will inspire readers to find out more.”—M. G. Lord, author of Astro Turf and The Accidental Feminist