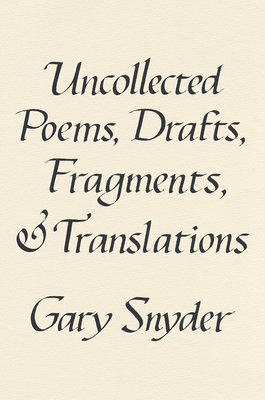 
On Our Shelves Now at:
Finalist in CALIBA's 2022 Golden Poppy Book Awards

A collection of previously uncollected and unpublished works by a Pulitzer Prize-winning Beat poet Gary Snyder, written during his most productive and important years

Far from being a simple miscellany of poems, Uncollected Poems, Drafts, Fragments, and Translations contains some of Gary Snyder’s best work, written during his most productive and important years.

Many of these have been published in magazines or as broadsides, including Spel Against Demons, Dear Mr. President, Hymn to the Goddess San Francisco, Smokey the Bear Sutra, A Curse on the Men in Washington, Pentagon. The collection also includes a great number of translations from Chinese and Japanese poets. Much of this work has been gleaned from journals, manuscripts and correspondence, and never before published in any form.
GARY SNYDER is the author of more than twenty collections of poetry and prose. Since 1970, he has lived in the watershed of the South Yuba River in the foothills of the Sierra Nevada. Winner of the Pulitzer Prize in 1975, Snyder has also been awarded the Bollingen Prize for Poetry and the Robert Kirsch Award for lifetime achievement. His 1992 collection, No Nature, was a National Book Award finalist, and in 2008 he received the Ruth Lilly Poetry Prize. Snyder is a poet, environmentalist, educator, and Zen Buddhist.
Finalist in CALIBA's 2022 Golden Poppy Book Awards
A Literary Hub Most Anticipated Book of the Year

"These previously uncollected and unpublished works by the Pulitzer-winning Beat poet sing with history, politics, and place, offering new glimpses into Snyder’s verse. The pieces showcase his passion for environmentalism and capture his ecstatic focus and compressed vision, as well as his irrepressible energy." —Publishers Weekly

"Snyder remains an important touchstone in American poetry and the environmental movement. This book—gathering late poems, journal entries and more—shows he has not let up." —The New York Times Book Review

"Snyder’s is a wise voice crying out on behalf of the wilderness with an authority and eloquence that’s not been heard in our literature since Thoreau." —San Francisco Chronicle

"His sense of the history of land and cultures and his ability to write as both the Worker and the Thinker create a fertile whole." —Los Angeles Times

"These previously uncollected and unpublished works by the Pulitzer Prize–winning Beat poet sing with history, politics, and place, offering new glimpses into Snyder’s verse . . . Readers drawn to Snyder’s irrepressible energy will find this a worthy addition to his established body of work." —Publishers Weekly