I Dream with Open Eyes: A Memoir (Hardcover) 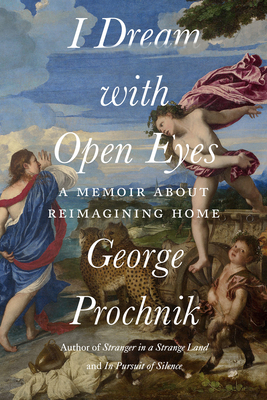 I Dream with Open Eyes: A Memoir (Hardcover)


On Our Shelves Now at:
A journey of reckoning and renewal, this story of family history and future dreams is an examination of the individual imagination as a catalyst for social change

Whatever the ideological slant of our information feeds, nowadays we all share a sense of binge-watching the apocalypse. Facing so much uncertainty, we need a language for thinking about the unknown not simply as a threat but also as a space of fertile possibility. George Prochnik has chosen to reflect on these urgent themes through the lens of a personal narrative: an account of his own family’s decision to leave the United States.

I Dream with Open Eyes begins with an exploration of Prochnik’s ancestral past: the pilgrimage of his mother’s family, who were among the first English settlers in the New World. In the aftermath of the 2016 election, a parallel migration unfolds as Prochnik, along with his wife and their son, makes the decision to uproot their lives in New York to move to England.

A deep critique of this current moment, Prochnik takes the words of nineteenth-century poet Heinrich Heine, “I dream with open eyes, and my eyes see,” as an inspiration to ask how, as a society, we might use art and literature to refract and expand our vision of the future, while simultaneously generating a new focus on present realities.
GEORGE PROCHNIK was awarded a Guggenheim Fellowship in general nonfiction in 2021. He is the author of five books of nonfiction including Stranger in a Strange Land, which was a New York Times editors’ choice and was short-listed for the 2018 Wingate Literary Prize in the United Kingdom. His previous book, The Impossible Exile, was shortlisted for the 2016 Wingate Literary Prize and won the National Jewish Book Award for Biography, Autobiography, and Memoir. Prochnik is also the author of In Pursuit of Silence, Putnam Camp, and Heinrich Heine: Writing the Revolution. He has written for The New Yorker, The New York Times, Bookforum, and Los Angeles Review of Books, and is editor at large for Cabinet magazine. Born in Grand Junction, Colorado, Prochnik currently lives in London with his wife and their son.
Praise for I Dream With Open Eyes:

"Prochnik’s memoir, in prose at once personal as well as profound, attempts to come to grips with provocations and polarities both inner and outer, forces nourished within his own being and down the line of his family tree, as well as those thrust upon him by a country marching to the verge of self-destruction. " —Ryan Asmussen, Chicago Review of Books

"A many faceted intellectual and moral inquiry rooted in [Prochnik's] exceptional erudition, philosophical cast of mind, and family history . . . As he delves into 'apocalyptic capitalism,' 'explorations of the unconscious,' Titian, the Surrealists, and Spider-Man, Prochnik traces the nexus between self and civilization with exacting and electrifying rigor, insight, and emotion." —Booklist

"Prochnik chooses to wrestle with the moral dilemma of what it would mean to continue to live in a country that could elect Donald Trump as its president. The result is a thoughtful, if sometimes challenging, journey through that process . . . The intellectual tapestry he weaves is complex and variegated . . . With critical elections looming in 2022 and 2024, the decision he faced may become an equally pressing one for others." —Shelf Awareness

"An erudite examination of heritage, home, the meaning of [Prochnik's] life’s work, and his place in the world . . . From Titian to the surrealists, Stefan Zweig to Walter Benjamin, H.D. to Elizabeth Bishop, Prochnik draws on art, philosophy, literature, and heavily on Freud as he contemplates his 'longing to move to a different moment in history' and to change his life—and his son’s—'instead of just being forced to submit to the ways the world was changing so alarmingly around us. A dark, brooding, and highly literate meditation.'" —Kirkus Reviews

"In this thrillingly candid book, Prochnik examines his decision to leave his home—the United States—and addresses questions that are becoming all too familiar and all too pressing for more and more of us: How do we proceed, how do we think, how do we understand ourselves and even our existence on Earth when social and political convulsions shatter our sense of belonging to something—to a nation or culture? Prochnik delights us with his transporting eloquence, kindness, and erudition, the originality of his thought, and astonishing reflections on his family and background. The book shines, and in the darkness where we live now, it leaves us with an orienting and invigorated sense of possibilities." ––Deborah Eisenberg, author of Your Duck Is My Duck

"George Prochnik is our great biographer of émigré writers, chronicling lost-and-found souls such as Heinrich Heine, Gershom Scholem, and Stefan Zweig as they flee from (and sometimes toward) disaster. In I Dream with Open Eyes Prochnik turns his exilic gaze on his own departure from New York City in the wake of the Trump election, an ambivalent leave-taking that has inspired this extraordinary reflection on 'home.' What is it exactly? A brownstone filled with mementoes of a family whose members range from early Puritans and friends of Emerson to Southern Confederates and associates of Freud to émigrés, like Freud, from a Vienna on the cusp of catastrophe? A Brooklyn neighborhood whose rich mix of people is threatened by a mercilessly unequal economy? A country that seems thrilled to death by nihilistic behavior of all sorts? A language that is everyday more corrupted by a bullshit artist turned President and a social media complex fueled by inflammatory takes? In the midst of this conflagration, heightened by a raging virus and a suffering environment, Prochnik seizes on almost utopian moments in which alternative ways of living and loving suddenly appear. This book offers hopeful respite in that unexpected home too." ––Hal Foster, author of What Comes after Farce? Art and Criticism at a Time of Debacle

Praise for In Pursuit of Silence:

"A fascinating—and often funny—look at our most abused sense. Turn off your iPod and read this book." —Elizabeth Kolbert, author of Field Notes from a Catastrophe

"George Prochnik has gifted us with an impassioned, searching meditation on the antique virtues of silence, the evolving natural history of our most overtaxed sense, the etiology of sound in the modern world and the discrete joys of earbud-free listening. Find a quiet corner in which to read this book, but then go out into the world and be prepared to hear it anew." —Tom Vanderbilt, author of Traffic

Praise for The Impossible Exile:

"[A] superbly lyrical study . . . The Impossible Exile is not really—or not just—a biography of Zweig's final years. It is a case study of dislocation, of people who had not only lost a home but who were no longer able to define the meaning of home . . . Mr. Prochnik gives a very rich sense of what so many exiles experienced during the war . . . [his] words could not be more resonant."  —Andre Aciman, The Wall Street Journal

"Subtle, prodigiously researched and enduringly human throughout, The Impossible Exile is a portrait of a man and of his endless flight." —The Economist