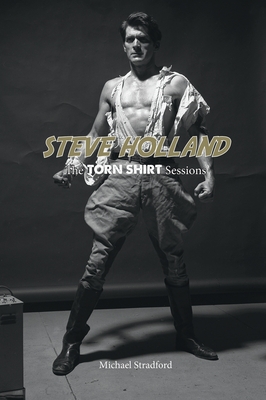 When Illustrator James Bama hired his good friend, model Steve Holland to be the new interpretation of pulp hero Doc Savage, he began the first of what would be 62 classic covers for Bantam paperback books in the sixties and seventies, rivaled only by Frank Frazetta's fantasy based Conan the Barbarian covers.

Holland starred on thousands of magazine, comic book and paperback covers for more than 30 years, working with the greatest illustrators of the day, including Mort Kunstler, Roger Kastel, Peter Caras, Sol Korby, Ron Lesser, Jack Faragasso and many other generational artists. He was The Spider, The Phantom, Tarzan, Conan, Matt Helm, Magnus Robot Fighter, Flash Gordon and dozens more. But of all the characters he portrayed, he is most closely associated with Doc Savage, The Man of Bronze.

Now for the first time, THE TORN SHIRT SESSIONS present the surviving reference photos of Holland's sessions with James Bama, Bob Larkin and Joe DeVito, in the best possible quality. You'll find inside the very first photos for Bama's initial painting, The Man of Bronze, and dozens in between, down to the very last session where a still fit at 66 Holland posed for Joe DeVito's painting of The Frightened Fish.

Steve Holland's Doc Savage inspired the imagination of legendary illustrators and continues to excite fans more than fifty years after the photos were taken NOTE: This is NOT a collection of James Bama paintings, though some are included. This is a book of reference photos of Steve Holland as Doc Savage.