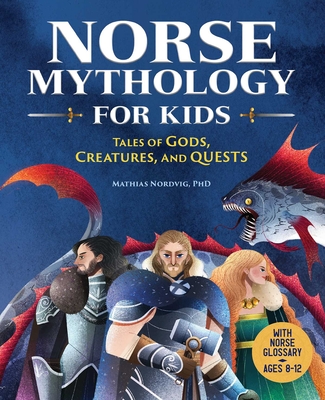 What is more awesome than the hammer-wielding thunder-god, Thor; the Queen of Asgard and all-knowing goddess, Frigg; or the gigantic sea serpent, Jormungand? Norse Mythology for Kids transports you into the Nordic lands where extraordinary creatures like giants, dwarfs, elves, and monsters walked among fearless gods and goddesses.

Featuring timeless stories from such countries as Iceland, Norway, and Denmark, this is your entryway into the magical world of Scandinavian folklore. With vividly detailed illustrations that pair with each myth, you'll feel like you are defending Asgard on the battlefield with the almighty Odin, shape-shifting from a snake to a hawk with the trickster Loki, slaying dragons with the brave Sigurd, and much more. Follow these engaging Norse mythology legends, and learn everything there is to know about the tall tales of the Norse.

Enter the wild world of Norse mythology with this great book for kids.