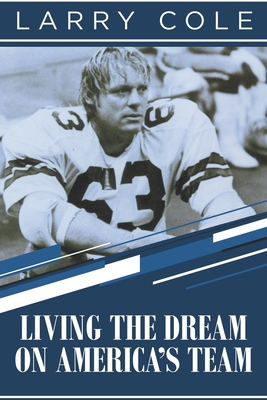 Larry Cole was an NFL player who played for the Dallas Cowboys from 1968 to 1981. He played during an exciting era of professional football. Joe Namath won the Super Bowl his rookie year. Monday Night Football started a couple of years later to sellout crowds where each city highlighted what made them different from other cities. He played in five Super Bowls at three different positions. He shares with you his childhood and high school years. Then he shares his experiences on through college, including a stint at the United States Air Force Academy. This would prepare him to compete in the NFL. He wrote this book for the purpose of sharing with you how he discovered his own unique talents to compete on and off the field. He started his building and development business during the off-season to provide a smooth transition to his life after football. He played thirteen years for the same coach, Tom Landry, and the same defensive line coach, Ernie Stautner. He played one year with Don Meredith at quarterback, all of Roger Staubach's eleven years, including six of Craig Morton's years competing with him, and one year with Danny White at the helm. He was part of "Doomsday I" and "Doomsday II." He gives you insights on how each year was different and how Tom Landry was able to put together so many years as a perennial playoff contender. When this author retired, he had played in twenty-six playoff games, an NFL record at that time.