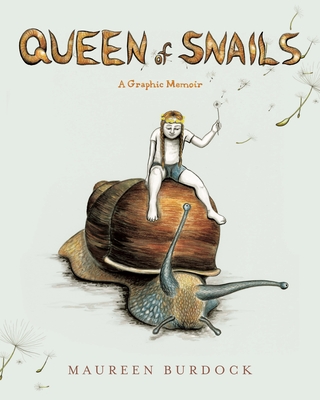 Home is not a place you can reach by train or plane. It's something you carry with you.

Uprooted from her childhood in Germany and set adrift in the American Midwest, Maureen was raised by a kind but neglectful mother who loved Jesus more than her own child and a stern, disinterested grandmother who waxed nostalgic about Nazi Germany. Growing up queer and isolated, Maureen often felt unmoored and unloved.

Years later, Maureen reflects upon her complicated past. Queen of Snails follows Maureen through time and memory in her quest to untangle the trauma passed down to her over three generations of women. Part memoir and part family history, Queen of Snails is a beautifully drawn, powerful story that examines and transmutes the emotional baggage of violence, abandonment, and displacement.

Maureen Burdock is a graphic storyteller and scholar. She is the author of Feminist Fables for the Twenty-First Century: The F Word Project, and she has contributed comics to various collections, including the Eisner-winning anthology Menopause: A Comic Treatment; Covid Chronicles: A Comics Anthology; and Pathographics: Narrative, Aesthetics, Contention, Community. You can follow her work at maureenburdock.com.