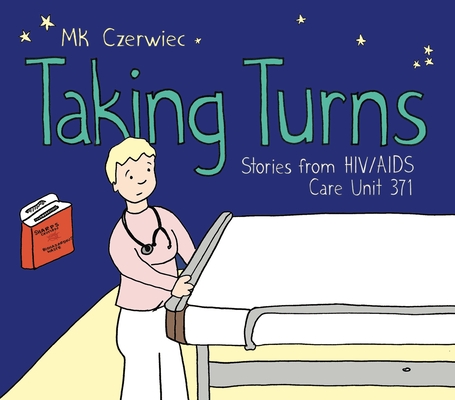 
Not On Our Shelves—Ships in 1-5 Days
A graphic memoir and adapted oral history of Unit 371, an inpatient AIDS care hospital unit in Chicago that was in existence from 1985 to 2000. Examines the human costs of caregiving and the role art can play in the grieving process. In 1994, at the height of the AIDS epidemic in the United States, MK Czerwiec took her first nursing job, at Illinois Masonic Medical Center in Chicago, as part of the caregiving staff of HIV/AIDS Care Unit 371. Taking Turns pulls back the curtain on life in the ward. A shining example of excellence in the treatment and care of patients, Unit 371 was a community for thousands of patients and families affected by HIV and AIDS and the people who cared for them. This graphic novel combines Czerwiec's memories with the oral histories of patients, family members, and staff. It depicts life and death in the ward, the ways the unit affected and informed those who passed through it, and how many look back on their time there today. Czerwiec joined Unit 371 at a pivotal time in the history of AIDS: deaths from the syndrome in the Midwest peaked in 1995 and then dropped drastically in the following years, with the release of antiretroviral protease inhibitors. This positive turn of events led to a decline in patient populations and, ultimately, to the closure of Unit 371. Czerwiec's restrained, inviting drawing style and carefully considered narrative examine individual, institutional, and community responses to the AIDS epidemic--as well as the role that art can play in the grieving process. Deeply personal yet made up of many voices, this history of daily life in a unique AIDS care unit is an open, honest look at suffering, grief, and hope among a community of medical professionals and patients at the heart of the epidemic.
MK Czerwiec, RN, MA, is Artist-in-Residence at Northwestern University's Center for Bioethics and Medical Humanities and the cocurator of the Graphic Medicine website (graphicmedicine.org). She has served as a Senior Fellow of the George Washington School of Nursing Center for Health Policy and Media Engagement and as an Applied Cartooning Fellow of the Center for Cartoon Studies. She is a coauthor of Graphic Medicine Manifesto and the editor of Menopause: A Comic Treatment, both published by Penn State University Press. MK is also the comics editor for the journal Literature & Medicine.