For Such a Time as This: My Faith Journey through the White House and Beyond (Hardcover) 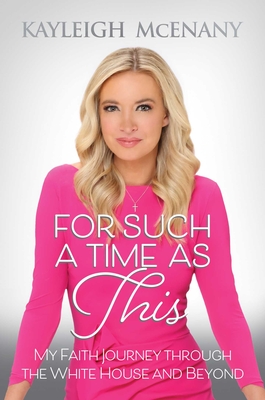 For Such a Time as This: My Faith Journey through the White House and Beyond (Hardcover)


Not On Our Shelves—Ships in 1-5 Days
New York Times Bestseller!

Kayleigh McEnany describes her path to the White House podium, bringing the reader behind the scenes in the world’s most powerful building and illuminating how faith got her through.

If you would have told me that in the year 2020 I would stand at the White House podium and communicate with the American people as COVID-19 ravaged the globe and violent protests beset the nation, I would have told you that you were crazy. But Jesus Christ had this very plan for my life.

From White House intern to White House press secretary, from production assistant to national television host, from Catholic all-girls high school to Harvard Law School, God has guided my path through uncharted territory. In For Such a Time as This, I will chronicle my journey to the White House and offer never-before-told anecdotes about what really happened within the Trump administration. You will experience some of the most high stakes moments in the West Wing right alongside me as I reveal how faith got me through.
Kayleigh McEnany is the former White House press secretary and current co-host of Outnumbered on the Fox News Channel. Prior to serving in the White House, Kayleigh worked as the national press secretary for the Trump campaign and was formerly the national spokesperson for the Republican National Committee. Before joining the RNC, Kayleigh worked as a political commentator at CNN.

Kayleigh graduated from Harvard Law School with a Juris Doctor and Georgetown University, Edmund A. Walsh School of Foreign Service with a degree in international politics. She also studied politics and international relations at Oxford University, St. Edmund Hall. Before law school, she worked at Fox News as an associate producer for Huckabee and appeared as a guest host on ABC’s The View. Kayleigh is a recipient of the Department of Defense Medal for Distinguished Public Service, and the Department of Homeland Security Secretary’s Public Service Award.