When Magic Failed: A Memoir of a Lebanese Childhood, Caught Between East and West (Hardcover) 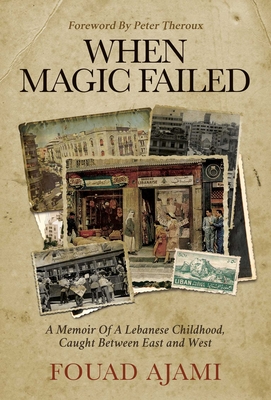 When Magic Failed: A Memoir of a Lebanese Childhood, Caught Between East and West (Hardcover)


On Our Shelves Now at:
From the author of The Arab Predicament and Dream Palace of the Arabs comes a beautiful and haunting memoir of growing up in Lebanon in the ’50s and ’60s—the story of a sensitive young man and budding intellectual caught between tradition and modernity, east and west.

As one of the most profound and insightful scholars of the Middle East, Fouad Ajami’s sensibility was powerfully shaped by his childhood and youth in Lebanon in the ’50s and ’60s. The time was a transitional one—not only for the Middle East, but for America and the world. Lebanon in this era was just coming into its own as a cosmopolitan destination of the international jet set as well as earnest American educators seeking to modernize Arab society. The disruptive forces of the Middle East—the Cold War, the Palestinian conflict, religious extremism, the money and oil of the Gulf—were only just beginning to appear. In this haunting and beautifully written memoir of his Lebanese childhood, the late Middle East scholar, Fouad Ajami, casts a discerning light into the corners and alleyways of an Arab reality that would later erupt into full view.
Fouad Ajami (September 18, 1945 June 22, 2014) was a Lebanese-born American university professor and a prolific writer on Middle Eastern issues. He was the Herbert and Jane Dwight Fellow at the Hoover Institution and the co-chair of the Herbert and Jane Dwight Working Group on Islamism and the International Order. From 1980 to 2011 he was a professor and director of Middle East studies at Johns Hopkins School of Advanced International Studies. He has written numerous books, including The Arab Predicament, Beirut: City of Regrets, The Vanished Imam: Musa al Sadr and the Shia of Lebanon, The Dream Palace of the Arabs, The Foreigner’s Gift: The Americans, the Arabs, and the Iraqis in Iraq, The Syrian Rebellion, In This Arab Time: The Pursuit of Deliverance, and Crosswinds: The Way of Saudi Arabia. His writings also include more than four hundred essays on Arab and Islamic politics, US foreign policy, and contemporary international history. Ajami received numerous awards, including the MacArthur Fellows Award (1982) and the National Medal of the Humanities (2006). His writings charted the road to 9/11, the Iraq War, and the US presence in the Arab-Islamic world.
“I have never read a more enchanting account of disenchantment, just as I have never known a man more independently immersed in his culture than Fouad Ajami. When Magic Failed is an uncanny monument to both love and truth. Lucidly and lyrically, it dotes on the world that it leaves. This is a beautiful and honorable book.”
— Leon Wieseltier

“In this powerfully written memoir, the late Fouad Ajami tells a story of profound disruption whose central theme is the impact of the modern world on the Shi‘ite villagers of southern Lebanon. The narrative begins with a mother killing her daughter to shield her family from shame, and ends soon after a young man—the author—leaves Beirut to study political science in the United States. In between are a series of intimate portraits of men and women whose lives are variously destroyed, blighted, enlivened, or blessed by winds of change that can reach gale force. The characterization is acute, and the characters are unforgettable.”
— Michael A. Cook