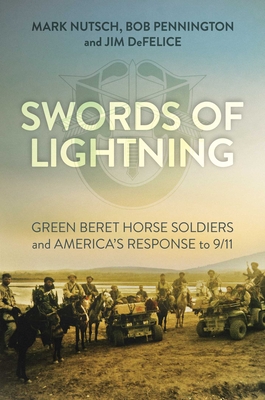 
Not On Our Shelves—Ships in 1-5 Days
The first-person account of how a small band of Green Berets used horses and laser-guided bombs to overthrow the Taliban and al-Qaeda in Afghanistan after 9/11.

They landed in a dust storm so thick the chopper pilot used dead reckoning and a guess to find the ground. Welcomed by a band of heavily armed militiamen, they climbed a mountain on horseback to meet the most ferocious warlord in Asia. They plotted a war of nineteenth-century maneuvers against a twenty-first-century foe. They trekked through minefields, sometimes past the mangled bodies of local tribesmen who’d shared food with them hours before. They saved babies and treated fractures, sewed up wounded who’d been transported from the battlefield by donkey. They found their enemy hiding in thick bunkers, dodged bullets from machine-gun-laden pickup trucks, and survived mass rocket attacks from vintage Soviet-era launchers. They battled the Taliban while mediating blood feuds between rival allies. They fought with everything they had, from smart bombs to AK-47s.The men they helped called them brothers. Hollywood called them the Horse Soldiers.

They called themselves Green Berets—Special Forces ODA 595.
Mark Nutsch served in the Army as a Ranger and Special Forces officer, deploying on multiple combat tours. In the aftermath of the 9/11 attacks, he led one of the first Special Forces teams into northern Afghanistan. There, he advised the resistance leadership, helping to unite the disparate forces against the Taliban and al-Qaeda. Fighting on horseback much of the time, Nutsch and his team spearheaded the unconventional warfare operations that liberated the country. Featured in multiple books and films, Nutsch is a sought-after speaker, lecturing often on leadership and military topics.

Retired Senior Warrant Officer Bob Pennington served in the Army for thirty-plus years. He’s commanded Green Berets in combat and trained candidates attending the Special Forces Q-Course. Pennington has written military doctrine, as well as lectured and consulted on film, books, and military monographs. He was recently inducted as a Distinguished Member of the Special Forces Regiment and the Georgia Military Veterans’ Hall of Fame. He and Mark are principals in the company that produces Horse Soldier Bourbon, an award-winning American liquor.

Jim DeFelice is the author or co-author of sixteen New York Times bestselling books, including American Sniper and Everyman a Hero. A winner of the Army Historical Foundation Award for his writing, he lives in the Hudson Valley.