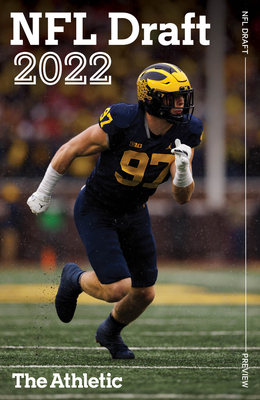 By The Athletic, Dane Brugler

The definitive guide to the 2022 NFL draft from leading draft expert Dane Brugler and the staff of The Athletic.

The NFL draft is one of the most anticipated events of the offseason, and 2022 looks to be one of the more unpredictable and intriguing years in recent memory. Up until April 30, fans everywhere will be closely examining college prospects and predicting how their talent will transfer to the next level.

This comprehensive preview features unmatched insight and analysis from from industry leaders Dane Brugler, Bruce Feldman, Matt Fortuna, and the NFL staff at The Athletic. Highlights include Brugler's top 100 NFL draft board, a two-round mock draft, positional rankings from QB to DB, player profiles, and more.

Featuring expert evaluations of hundreds of prospects, this is a must-have resource for NFL fans, fantasy players, and sports bettors.

Dane Brugler is considered one of the nation's foremost NFL Draft analysts. He is a national NFL writer for The Athletic and previously covered the NFL Draft for NFL Draft Scout and CBS Sports.