History of the Philippines: A Captivating Guide to Philippine History (Hardcover) 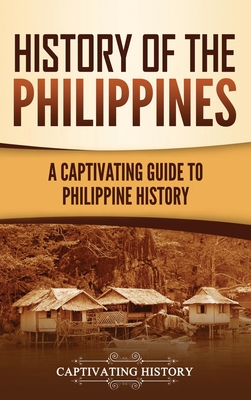 History of the Philippines: A Captivating Guide to Philippine History (Hardcover)

Discover the fascinating Philippines in this captivating book on its history, from the origins of the archipelago's first peoples until modern times.

The Philippines is possibly the most intriguing nation of maritime Southeast Asia. The archipelago has almost eight thousand islands that form the apex of the Coral Triangle of the Asian Pacific, as well as abundant marine life that constitutes almost half of this magnificent area's oceanic megadiversity. Created from volcanic activity, the archipelago offers everything from extensive beaches to tropical forests and Himalayan-type highlands. Lush valleys and world-renowned rice terraces nestle between the mountains and volcanoes. The Philippines boasts an overwhelming array of biodiversity, both fauna and flora, with many of the species being endemic. The islands have not always been as distant from the mainland, and as sea levels rose and fell during the ice ages, the Philippines became home to successive waves of migrants over the millennia. The Philippines is as old as it is beautiful, and it has produced one of the earliest examples of ancient humankind on Earth and provides a wealth of ancient artifacts from human civilizations, as well as prehistoric creatures.

The Philippines is further gifted with abundant mineral and metal resources, and in the Common Era, powerful Filipino principalities built upon foreign trade that emerged at strategic places on the ancient maritime trade routes. The Filipinos' interactions with the Indianized kingdoms of Java and Sumatra merged with influences from Arabia and the Asian mainland. Trade, piracy, intermarriages, and cultural blending created a diverse and unique archipelagic culture. Once colonial influences arrived in the 16th century, the Philippines was mostly involved with the Sultanate of Brunei from Borneo, China, and Japan. Spanish colonists eventually had control of the Philippines-which they demarcated and named-by the late 1500s and retained suzerainty over the islands for over three hundred years. For the first half of the 20th century, the Americans controlled the Philippines, mostly as a strategic military stronghold. The Americans and Filipinos battled together to throw off Japanese occupation during the Second World War, and finally, in 1946, the Philippines became an independent state. Still heavily influenced by the West because of its history, the Filipino people are mostly Roman Catholic, and English is one of their primary languages. Beauty, history, and cultural diversity ensure this archipelago's tradition as the "Pearl of the Orient Seas."

In this book, you will learn: