History of Italy: A Captivating Guide to Italian History, Starting from the First Settlements through the Middle Ages to the Modern Peri (Hardcover) 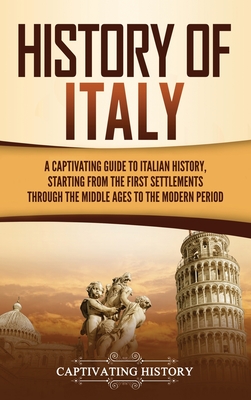 History of Italy: A Captivating Guide to Italian History, Starting from the First Settlements through the Middle Ages to the Modern Peri (Hardcover)

If you want to discover the captivating history of Italy, then keep reading...

It is not an easy job to draw the border between the history of Italy and the history of Rome. In so many places, the two political and geographical entities collide. They wouldn't be possible without each other, but they each have their own story. Rome's history is only a small fragment of Italy's history. Although it is just a city, Rome was the birthplace of the republic, a great empire, and notable philosophers, poets, and artists. But on a larger scale, Rome expanded its borders, spreading not only through Italy but also through the whole known world. In that context, Rome ceased being only a city; it also became a universal imperial symbol and the pride of Italy.

Italy wasn't a united nation until the 19th century, which means the history of this country is very fragmented. It is the job of historians, archaeologists, anthropologists, linguists, and various scientists to pick up the pieces of the peninsula's past and put them together. Only then will we have a clear picture, a mosaic if you will, of the past of one of the most significant nations of Europe and the world. And after it is pieced together, we need to deconstruct the mosaic and take a look at each fragment to learn about the different peoples, cultures, and religions that were and still are a part of Italy.

In History of Italy: A Captivating Guide to Italian History, Starting from the First Settlements through the Middle Ages to the Modern Period, you will discover topics such as

So if you want to learn more about the history of Italy, scroll up and click the "add to cart" button