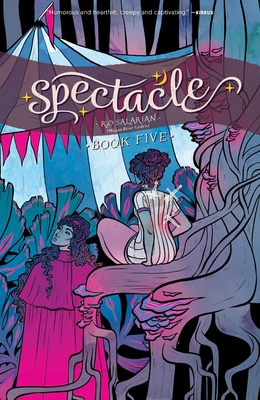 This is book number 5 in the Spectacle series.

"It’s Geek Love for a new generation, with lush and expressive art to boot." — AV Club

At long last, sideshow performer Anna comes face-to-face with her sister's killer, and she is not in a forgiving mood. But there's a far more sinister enemy behind everything; one Anna and her friends might not be able to beat, one they might not even be able to reach. Only Anna is determined and ready for a confrontation, while everyone else is eager to put it all behind them.

Ghosts were one thing. Demons were another. Can Anna find a way into another dimension to fight a god? This conclusion to the epic series is here!
Ro Salarian gave up their dream job of being a cheesemonger for their other dream job of making comics. They live in a probably haunted house in Chicago with their cat, Scrambles the Death Dealer.