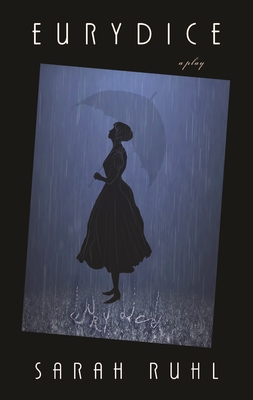 "Eurydice is a luminous retelling of the Orpheus myth from
his beloved wife's point of view. Watching it, we enter a singular,
surreal world, as lush and limpid as a dream--an anxiety dream of love
and loss--where both author and audience swim in the magical, sometimes
menacing, and always thrilling flow of the unconscious... Ruhl's
theatrical voice is reticent and daring, accurate and outlandish." --John
Lahr, New Yorker

A reimagining of the classic myth of
Orpheus through the eyes of its heroine. Dying too young on her wedding
day, Eurydice journeys to the underworld, where she reunites with her
beloved father and struggles to recover lost memories of her husband and
the world she left behind.

Sarah Ruhl's fifteen plays include the Pulitzer Prizefinalists The Clean House and In the Next Room (or the vibratorplay), also nominated for a Tony Award. Her awards include a MacArthurFellowship, and her book of essays 100 Essays I Don't Have Time to Write wasa New York Times Notable Book of the Year. Eurydice, named one ofthe 25 best American plays of the past 25 years in 2018 by the New YorkTimes, was developed into an opera with music by Matthew Aucoin, andperformed at The Metropolitan Opera in 2021. Her most recent book, Smile: The Story of a Face, was published in 2021 by Simon & Schuster. Ruhlteaches at the Yale School of Drama, and lives in Brooklyn with her family.