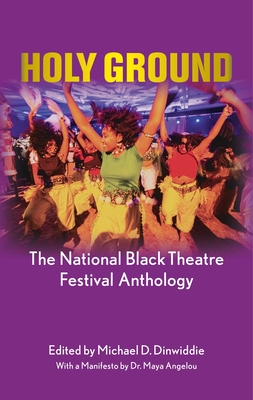 
On Our Shelves Now at:
This new collection brings together plays and monologues from the National Black Theatre Festival, one of the most historic and culturally significant events--not only in the history of Black theater but in American theater. Held every two years in Winston-Salem, North Carolina, this gathering of Black theater companies and artists from around the country and across the globe features an extraordinary array of performances, workshops, films, spoken-word poetry, and more. Established in 1989 by Larry Leon Hamlin and the North Carolina Black Repertory Company, this volume includes three full-length plays produced at the Festival: Maid's Door by
Cheryl L. Davis Berta, Berta by
Angelica Ch ri Looking for Leroy by Larry Muhammad This collection also includes seventeen monologues and scenes selected from each year of the Festival, featuring the artists and playwrights: Jackie Alexander, Ifa Bayeza, Pearl Cleage, Kamilah Forbes, Endesha Ida Mae Holland, Javon Johnson, Rhodessa Jones, and others.
Michael Dinwiddie is a professor at New York University. A dramatist whose works have been produced in New York, regional, and educational theater, he has been playwright-in-residence at Michigan State University and St. Louis University and taught writing courses at the College of New Rochelle, Florida A&M University, SUNY Stony Brook, California State University at San Bernardino, and Universidad de Palermo in Buenos Aires, Argentina. He spent a year at Touchstone Pictures as a Walt Disney Fellow and worked as a staff writer on ABC-TV's Hangin' with Mr. Cooper. He was awarded a 1995 National Endowment for the Arts Fellowship in Playwriting. Professor Dinwiddie received a 2005 NYU Distinguished Teaching Award in recognition of exceptional teaching inside and outside of the classroom setting.