The Gospel of the Hold Steady: How a Resurrection Really Feels (Hardcover) 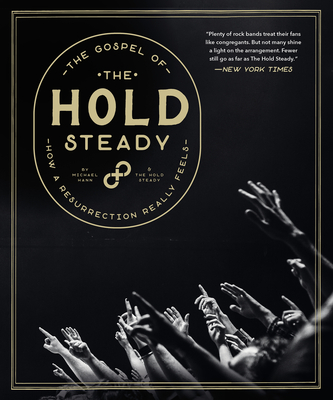 The Gospel of the Hold Steady: How a Resurrection Really Feels (Hardcover)

By Michael Hann, The Hold Steady

"Plenty of rock bands treat their fans like congregants. But not many shine a light on the arrangement. Fewer still go as far as The Hold Steady, whose lead vocalist and lyricist, Craig Finn, has a disarming way of combining humility and exultation." --New York Times

On January 22, 2003, four men stepped onto a stage in Brooklyn and did something no one else was doing at that time, in that place. They played rock 'n' roll: old-fashioned rock 'n' roll with skyscraping riffs and sloppy solos, topped with extraordinary lyrics about an out-of-focus America, blurred by pills and powders, of crime and fear and desperation and redemption.

Twenty years later, The Hold Steady are one of America's most beloved rock bands, famed for live shows that turn unbelievers into converts, and for a catalog filled with some of the most exciting yet poetic music of the twenty-first century. To mark those twenty years, The Hold Steady tell their full story in The Gospel of The Hold Steady: How a Resurrection Really Feels.

An oral history, based on interviews with everyone who has played in the band, and those who have worked with them over the course of their career, The Gospel of the Hold Steady addresses all the triumphs and setbacks of The Hold Steady's career in the band's own words--from high times to near deaths, from the brink of splitting to their current renaissance. The volume also includes over 200 photographs and images.

The Gospel of The Hold Steady is completed by essays about America's greatest bar band by writers Rob Sheffield, Laura Barton, Isaac Fitzgerald, and Michael Hann, as well as the thoughts and memories of "The Unified Scene"--the fans who have helped define the band's identity over the years. This is a book for everyone who loves The Hold Steady, and anyone who understands that the magic of rock 'n' roll happens on a stage in a small room, with voices raised from the crowd.

The Hold Steady is Craig Finn, Tad Kubler, Galen Polivka, Bobby Drake, Franz Nicolay, and Steve Selvidge. Since forming in Brooklyn in 2003, they have released eight studio albums, most recently Open Door Policy in 2021. Their debut album, The Hold Steady Almost Killed Me, was named one of the 100 best albums of this century by Rolling Stone. Michael Hann is a writer and editor based in London, who contributes to the Guardian, the Financial Times, the Economist, the Spectator, the Quietus, and Uncut. He was formerly the film and music editor at the Guardian. He is the author of Denim and Leather: The Rise and Fall of the New Wave of British Heavy Metal.