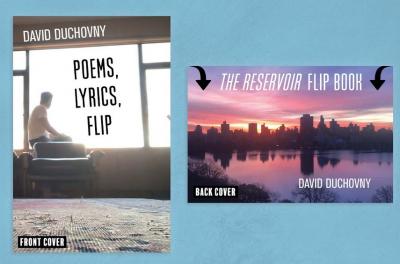 Read in one direction, the chapbook comprises select lyrics from Duchovny’s three studio albums plus brand new poems, including one written from the perspective of The Reservoir‘s main character, Ridley. In reverse, the chapbook is a full-color flip-book of one of the time-lapse videos David Duchovny created while writing The Reservoir.

DAVID DUCHOVNY is an award-winning actor, writer, director, New York Times best-selling author, and singer-songwriter. With an acting career spanning more than three decades, Duchovny is a two-time Golden Globe winner and four-time Emmy nominee. He is a prolific author whose fourth novel, Truly Like Lightning, was published in February 2021. His previous novels include Holy Cow, Bucky F*cking Dent, and Miss Subways. As a musician, Duchovny has released three studio albums, Hell or Highwater, Every Third Thought, and Gestureland. He is the author of The Reservoir.