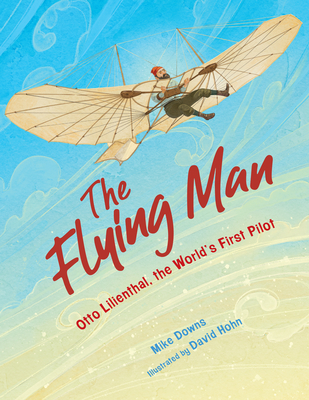 
On Our Shelves Now at:
Here is the little-known history of Otto Lilienthal, a daring man whose more than 2,000 successful flights inspired the Wright Brothers and other aviation pioneers.

In 1862, balloons were the only way to reach the sky. But 14-year-old Otto Lilienthal didn’t want to fly in balloons. He wanted to soar like a bird. Scientists, teachers, and news reporters everywhere said flying was impossible. Otto and his brother Gustav desperately wanted to prove them wrong, so they made their own wings and tried to take flight. The brothers quickly crashed, but this was just the beginning for Otto, who would spend the next 30 years of his life sketching, re-sketching, and building gliders.

Over time, Otto’s flights got longer. His control got better. He learned the tricks and twists of the wind. His flights even began to draw crowds. By the time of his death at age 48, Otto had made more than 2,000 successful glider flights. He was the first person in history to spend this much time in the air, earning the title of the world’s first pilot and paving the way for future aviation pioneers.
Mike Downs is the author of more than 30 books for children, including the books You See a Circus, I See... and You See a Zoo, I See.... He is a lifelong pilot who has flown hang gliders, jet fighters, airliners and more. He is a graduate of the USAF Academy, with a Master’s Degree in Aviation Science.

David Hohn is the illustrator of several books including Just Like Beverly: A Biography of Beverly Cleary, which garnered starred reviews from Kirkus Reviews and Booklist. Visit davidhohn.com.
"A soaring tribute to a pioneering German aviator who had a dream and the perseverance to achieve it... The author chronicles years of determined research, observation, trial and error, and crashes as Otto and younger brother Gustav work hard at attaining their goal despite skepticism from those around them." —Kirkus Reviews

★ "Readers will marvel at Lilienthal’s perseverance of his dream over the span of his life and the research he did into the flight of birds as it related to his designs.... [and] will enjoy learning about a not very well-known designer and inventor of flying machines, making this book a missing link in collections about aviation and flight." —School Library Journal, starred review