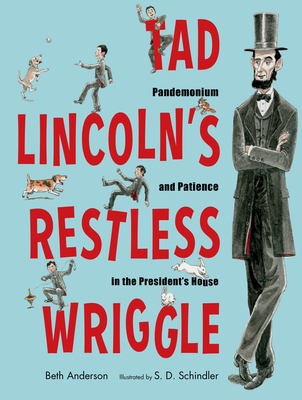 Tad Lincoln's restless wriggle just wouldn’t quit, much to the delight of his father, President Abraham Lincoln—if not so much to anybody else! This picture book brings to life the famous first son who coped with a disability and other challenges while showing compassion, intelligence, and wisdom beyond his years.

Tad Lincoln's boundless energy annoyed almost everyone but his father, President Abraham Lincoln. But Tad put that energy to good use during the tough times of the Civil War. Abraham Lincoln guided Tad's wriggle on visits to hospitals, to the telegraph office, and to army camps. Tad greeted visitors, raised money for bandages, and kept his father company late into the night. This special and patient bond between father and son was plain to see, and before long, Tad had wriggled his way into the hearts of others as well. Beth Anderson and S.D. Schindler follow Tad's antics during the Civil War to uncover the generous heart and joyful spirit that powered Tad's restless wriggle.
Beth Anderson, a former English as a Second Language teacher, has always marveled at the power of books. With linguistics and reading degrees, a fascination with language, and a penchant for untold tales, she strives for accidental learning in the midst of a great story. Beth lives in Loveland, Colorado where she laughs, ponders, and questions; and hopes to inspire kids to do the same. She’s the award-winning author of “Smelly" Kelly and His Super Senses; Lizzie Demands a Seat!, and An Inconvenient Alphabet. Beth has more historical gems on the way. Visit bethandersonwriter.com.

S.D. Schindler embraces the inventive spirit every time he illustrates a book--and he has illustrated many! An award-winning and best-selling illustrator, his recent titles include: We're Going on a Ghost Hunt by Susan Pearson, Hornbooks and Inkwells by Verla Kay, and The Unforgettable Season by Phil Bildner. His books have won a Parents' Choice Award for Illustration, a Smithsonian Award for outstanding natural history title, and a Best Book selection by School Library Journal. Visit sdschindlerbooks.com.
"Anderson’s lively text offers anecdotes along with insights into how Tad's high-spirited escapades may have given Lincoln welcome relief from his weighty responsibilities. Created using ink, watercolor, and gouache, Schindler’s lively illustrations bring a lesser-known White House resident to life within a distinctive period setting. A vivid introduction to Tad Lincoln." —Booklist

"Learn about the Lincoln family through the life of their youngest child... the story’s strength lies in its quiet depictions of Abraham Lincoln and his wry humor that many children’s history books ignore. The fine-lined and delicately colored illustrations capture the energy of the day and don’t sugarcoat the Whiteness of Lincoln’s world; most of the Black characters depicted are servants. Readers fascinated by this glimpse into Tad’s story will want to know more, and caregivers and educators will delight in the extensive bibliography and source notes that will aid that exploration. A lively glimpse into the Lincoln home." —Kirkus Reviews

"Anderson skillfully shows the relationship Lincoln had with his son [Tad]...She includes stories of Tad's antics in front of adults and his empathy for others, both of which lifted the President's spirits during wartime. The text reads aloud smoothly. S.D. Schindler's use of India ink, transparent inks, watercolor, and gouache illustrations are light and delightful...detailed historic touches abound which make the depiction of 1863 feel authentic." —School Library Connection