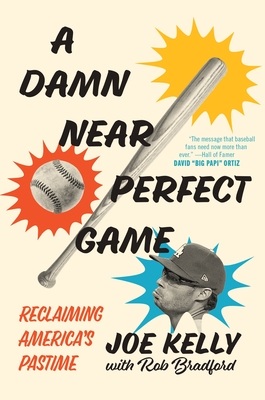 By Joe Kelly, Rob Bradford (With)

Baseball's most outspoken fireballer brings the high heat--calling out the hacks, cheats, and ridiculous rules that have tarnished the game--and pitches a-plus stuff on how to make baseball pure, fun, and damn near perfect.

Baseball has an image problem. The chorus of nonbelievers gets louder every year, and the Major Leagues have made an art of tuning them out. Enter Joe Kelly: a walking, talking, fast-ball-throwing embodiment of why baseball matters. He and his All-Star team of athletes and celebrities have some things to say about what's gone wrong with our once great game and how to fix it.

A Damn Near Perfect Game is the loudest insider's expos of the laws and culture of Major League Baseball since Jim Bouton's classic Ball Four. From Kelly's perspective as a two-time World Series champion and baseball's most memeable player according to ESPN, he takes readers on a house-cleaning tour of the clubhouse, the field of play, the bullpen, the front office, the commissioner's office, and a ballplayer's restricted life off the field. Kelly has something to say about baseball's rule changes (pitch clocks, limiting defensive shifts, the designated hitter); hacks (overused analytics, sign-stealing); stale promotion to new fans; and encouraging players' emotions (let them fight, bat-flip, and talk sh*t ). Plus, he details how he aired his complaints in an illuminating meeting with commissioner Rob Manfred.

And to show what happens when baseball has some piss and vinegar, Kelly gives the inside scoop on his legendary exploits--starting a bench-clearing brawl with the Yankees' Tyler Austin, his famous "pouty face" scene when calling out the notorious sign-stealing Houston Astros, and wearing a mariachi jacket to visit the White House with his World Series champion LA Dodgers.