Back to Japan: The Life and Art of Master Kimono Painter Kunihiko Moriguchi (Hardcover) 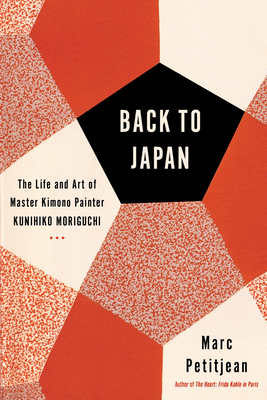 Back to Japan: The Life and Art of Master Kimono Painter Kunihiko Moriguchi (Hardcover)


In Stock—Click for Locations
Bustle: Best Book of the Month

From the critically acclaimed author of The Heart: Frida Kahlo in Paris, a fascinating, intimate portrait of one of Japan’s most influential and respected textile artists.

Writer, filmmaker, and photographer Marc Petitjean finds himself in Kyoto one fine morning with his camera, to film a man who will become his friend: Kunihiko Moriguchi, a master kimono painter and Living National Treasure—like his father before him.

As a young decorative arts student in the 1960s, Moriguchi rubbed shoulders with the cultural elite of Paris and befriended Balthus, who would profoundly influence his artistic career. Discouraged by Balthus from pursuing design in Europe, he returned to Japan to take up his father’s vocation. Once back in this world of tradition he had tried to escape, Moriguchi contemporized the craft of Yūzen (resist dyeing) through his innovative use of abstraction in patterns.

With a documentarian’s keen eye, Petitjean retraces Moriguchi’s remarkable life, from his childhood during the turbulent 1940s and 50s marked by war, to his prime as an artist with works exhibited in the most prestigious museums in the world.
Marc Petitjean is a writer, filmmaker, and photographer. He has directed several documentaries, including From Hiroshima to Fukushima, on Dr. Shuntaro Hida, a survivor of the atomic bombing of Hiroshima; Living Treasure, about Japanese kimono painter Kunihiko Moriguchi; and Zones grises, on his own search for information about the life of his father, Michel Petitjean, after his death.

Adriana Hunter studied French and Drama at the University of London. She has translated nearly ninety books, including Véronique Olmi’s Bakhita and Hervé Le Tellier’s Eléctrico W, winner of the French-American Foundation’s 2013 Translation Prize in Fiction. She lives in Kent, England.
“In the limpid stillness of Marc Petitjean’s sentences, and the focus of his gaze, Back to Japan becomes something deeper than a conventional biography. It’s an act of profound contemplation.”  —Judith Thurman, author of Secrets of the Flesh: A Life of Colette

“A treasure of a book about a living treasure. Kunihiko Moriguchi’s story is the story of Japanese craftsmanship at its most elegant, and Marc Petitjean’s intimate biography is a window into a rarefied world most Japanese and foreigners never get to see.” —Matt Alt, author of Pure Invention: How Japan Made the Modern World

“An eye-opening sojourn into the world of Japanese art and the remarkable life of a Japanese National Treasure, famed textile artist Kunihiko Moriguchi. It was a delight to read from beginning to end as well as an education into things Japanese.” —Robert Whiting, author of Tokyo Junkie

“Kimono designer Kunihiko Moriguchi is a ‘Living National Treasure,’ the highest cultural recognition bestowed in Japan. But he is not simply preserving a tradition. He has absorbed a modern Western aesthetic, creating his own unique style. This is the story of how he grew up enfolded in a traditional family, learning skills from his father, then leaping into the art world of Paris in the 1960s, only to discover that his true calling lay back home in Kyoto. A rare cosmopolitan figure in the world of Japanese traditional crafts deemed worthy of Intangible Cultural Heritage status, Moriguchi is portrayed through the eyes of his French friend, filmmaker Marc Petitjean, for whom Moriguchi is a portal for understanding deep Japanese sensibilities. An intimate and engrossing portrait of an artist’s life within French and Japanese culture.” —Liza Dalby, author of Geisha and The Tale of Murasaki

“Through his personal interaction with the textile artist, Marc Petitjean narrates a captivating biographical story of Kunihiko Moriguchi, who is a direct successor of the long history and technique of yūzen, a paste-resist method of dyeing invented in the second half of the sixteenth century. Moriguchi combined Japanese tradition and Western modernity to create unique and original geometrical designs that are now his trademark. The book details his upbringing in Kyoto, his experiences in France, and influences from his mentors, such as his father and Balthus, all of which shaped who he is today as Japan’s Living National Treasure. The book is a must-read for anyone who is interested in Japanese art and culture.” —Yuniya Kawamura, Professor of Sociology, Fashion Institute of Technology, and author of The Japanese Revolution in Paris Fashion

“Marc Petitjean’s wonderfully compact book delivers an intimate account of the kimono in modern times from the unique perspective of one of its most esteemed practitioners, kimono painter and Living National Treasure Kunihiko Moriguchi. More than his kimono designs, we learn about the place of the kimono and its arts in contemporary times through Moriguchi’s eyes—from growing up as the son of a renowned kimono painter during the postwar poverty of Japan, escaping to Paris to find a new context for his art, and returning to Japan to define his art’s own context. Back to Japan centers on this life-changing decision. Petitjean gives a candid portrayal of his friend and artist who fiercely protected his creative voice while proudly carrying on the artistic tradition in kimono of permanent innovation.” —Vivian Li, Lupe Murchison Curator of Contemporary Art, Dallas Museum of Art, and coauthor of Kimono Couture: The Beauty of Chiso

“Reading this book is like overhearing someone’s extraordinary story at an intimate cocktail party, with all the characters in the room, and it somehow made me nostalgic for a life before I was born—Paris in the sixties, Kyoto in the seventies. Thanks to Petitjean’s sensitive observation and careful research, we get to witness the unfolding of Moriguchi’s lifelong quest for creative freedom within the constraints of a traditional culture. Back to Japan is a real treasure.” —Beth Kempton, author of Wabi Sabi: Japanese Wisdom for a Perfectly Imperfect Life

“Marc Petitjean takes readers on a remarkable journey into the life and art of Kunihiko Moriguchi, a Living National Treasure and one of the great masters of yūzen. From the galleries of Paris to the strict workshops of Kyoto, Back to Japan offers an intimate glimpse of an artist who at once preserves and revolutionizes a centuries-old art form. Petitjean’s poetic and heartfelt prose, along with Moriguchi’s extraordinary creations, will linger in your imagination long after you close the pages.” —Virginia Soenksen, Director, Madison Art Collection and Lisanby Museum, and coauthor of Textiles of Japan

“Marc Petitjean’s Back to Japan: The Life and Art of Master Kimono Painter Kunihiko Moriguchi is an exquisite journey into the life trajectory and work ethos of Moriguchi. While painting a vivid portrait of the master, Petitjean also describes the eternal conflicts of modernity vs. tradition, art and artisanal thought processes, and cross-cultural otherness. This book is a rare glimpse into this rarified world and is written with sensitivity and skill.” —Manami Okazaki, author of Kimono Now

“Back to Japan highlights the way art crosses borders—temporal and geographical—and weaves together friendships and family legacies. At once moving and profound, the book follows the life course of a son who, in sacrificing his own passions, discovers new modes of expression in the elegant folds and shadows of traditional yūzen dyeing. Marc Petitjean’s riveting portrait of textile artist Kunihiko Moriguchi is more than biography; it is a testimony to the ‘dynamic dignity’ this art requires.” —Rebecca Copeland, Professor of Japanese Literature, Washington University in St. Louis, and author of The Kimono Tattoo

Praise for The Heart: Frida Kahlo in Paris:

“Compelling...[Petitjean] captures the pop and fizz of artistic circles in Paris during the interwar years...The Heart is a distinctively intimate undertaking, which is no small feat considering its well-known cast of characters...an unconventional and deeply personal biography.” —Washington Post

“An intimate portrait of the artist and her time in the lively 1930s surrealist scene.” —New York Times Book Review

“This crisp, concise, radiant gem of a book is a delight all the way through, whether you see it as a yarn of multigenerational heartbreak and longing, a beautiful and unlikely father-son chronicle, a classic artist-muse love story, or a cautionary tale about the most obsessively rendered city on earth.” —Bookforum