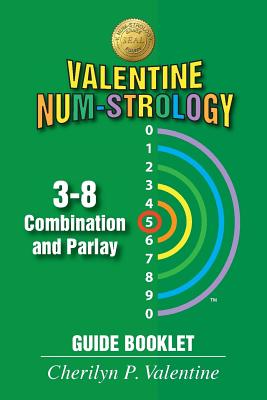 This is book number 3 in the Valentine Num-Strology series.

This booklet, the third in a series, was written for the pleasure and amusement of shut-ins and ongoing people who enjoy the game of combination of lucky numbers. A true source to play one's lucky numbers by. As author Cherilyn P. Valentine says, "Win via this Valentine Num-Strology Lucky Pet Numbers booklet, which describes a novel tool called the Cherilyn Assemblage Numbers Arithmetic (CANA), invented by me, the world's only Assemblagist for numbers." Good Luck and Success with this Valentine Num-Strology booklet