At the Breaking Point of History: How Decades of U.S. Duplicity Enabled the Pandemic (Paperback) 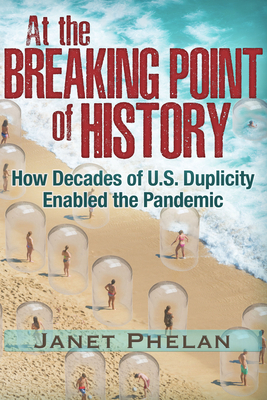 At the Breaking Point of History: How Decades of U.S. Duplicity Enabled the Pandemic (Paperback)


Special Order—Subject to Availability
From lead pipes in Flint, Michigan, to a duplicitous water commission in Medford, Oregon, to a secret psychiatric ward at UCLA, to the elegant halls of the Palais des Nations in Geneva, Switzerland, "At the Breaking Point of History" relentlessly details the US government's indifference to the welfare of individuals and to its legal obligations under national and international accords prohibiting human experimentation and biological and chemical weapons. Phelan uncovers shocking machinations, executed at the highest and lowest levels of power, pointing towards a pandemic of as yet unrealized proportions.
Janet Phelan is an investigative reporter. Her articles have appeared in the Los Angeles Times, the San Bernardino County Sentinel, Orange Coast Magazine, New Eastern Outlook, and elsewhere. She currently writes for Activist Post and has previously published an intelligence expose, Exile, and two books of poetry.
“Janet Phelan is a phenomenal, thrilling writer.” —Activist Post (concerning Exile)


​“I am so excited about this book Janet decided to write. It will be a godsend for many in these uncertain times. I am a fan of her work, I know her dogged dedication to accuracy and truth. She writes from her heart not only for the enlightenment of those seeking important information and wisdom therefrom, but she also writes for the overall betterment of the human condition.” —Karen Melton Stewart, NSA whistleblower

"Janet Phelan has been asking the right questions for a long time. It's time we start paying attention." —Sean Stone