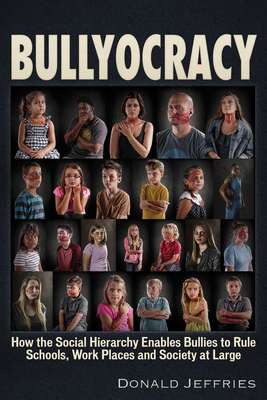 
Special Order—Subject to Availability
Bestselling author Donald Jeffries turns his critical eye onto the topic of bullying to show how teachers, principals, and other school officials invariably side with the bullies in the most egregious cases, instead of protecting the victims. He also shows how many so-called anti-bullying activists and nearly all the professional “experts” excuse bullying and in fact laud sociopathic behavior in general. As Jeffries demonstrates, this curious phenomenon is due to the power and influence of the social hierarchy, and it revolves to a great extent around the enduring popularity of sports. Jeffries talked to parents who’d battled a system that logically should have been working for them, some of whom lost a child to bullycide, the term for children who kill themselves over bullying. His investigation into what has become one of the most talked about issues in America is as explosive and controversial as anything he has written.
Donald Jeffries began researching the JFK assassination as a teenage volunteer with Mark Lane’s Citizens Committee of Inquiry in the mid-1970s. His 2007 novel The Unreals was lauded by the likes of author Alexander Theroux and Night at the Museum screenwriter R. Ben Garant. His first nonfiction book, Hidden History: An Expose of Modern Crimes, Conspiracies, and Cover-Ups in American Politics, became a bestseller praised by everyone from Roger Stone to former Congressional Representative Cynthia McKinney to international peace activist Cindy Sheehan.

From hostile high school hallways to the Oval Office, we've become a nation ruled by bullies, while those who are ostensibly there to protect us actively or passively enable them. In this trenchant expose, Donald Jeffries reveals how pervasive is the "bullyocracy" and suggests some of the social factors that can diminish its power." —Michael Kimmel, SUNY Distinguished Professor of Sociology and Gender Studies, Executive Director, Center for the Study of Men and Masculinities

"Donald Jeffries is one of our most talented and prolific writers who is never afraid to tackle the most difficult problems facing society today. Here he focuses on bullying in our education system with special insights into cyber-bullying that has emerged as a lethal form of persecution. High schools in many ways have become a jungle where bullies pounce on their weaker victims, many of whom carry the scars for years. Jeffries not only explores the issues involved but adroitly proposes solutions. His information is invaluable." —Douglas Caddy, Author, and Member of the District of Columbia and Texas Bars

"We have insight into the root cause of bullying, why it continues to occur, and its long term effects, so why do we still have a bullying epidemic? Teaching students, parents, and school officials about the negative effects of bullying early-on is only part of the solution. As a society and as individuals, we still allow bullies to rule the classroom, the boardroom, even the oval office. Don Jeffries's thoroughly researched book explains why and how this continues to occur. Like it or not, bullying affects us all. This is an important topic worth examining and a book that needs to be read." —Jesse Ventura, former Independent Governor of Minnesota

"Jeffries shows the enraging parallels between workplace and schoolyard bullies and how American institutions historically and consistently side with the aggressors, even when they advertise themselves as “zero tolerance” zones. This applies to victims who take their own lives as well, as the book eloquently points how even their experiences are often conveniently rewritten post-death in favor of their abusers. This book collects both tragic accounts of bullying as well as some of the more absurd steps of “zero tolerance” taken in a vain attempt to cover an institution's rear end instead of caring for the well-being of any tortured individual." —Gina Tron, author of You're Fine