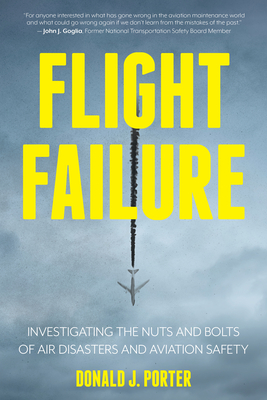 
Backordered
A former aircraft engineer exposes the dangerous breakdown in airline safety due to lapses in maintenance and quality control. This book chronicles maintenance-related accidents -including the recent Boeing 737 MAX accidents -caused by individual, corporate, or governmental negligence and brings the industry's current state of affairs into sharp focus. The author, a former aviation engineer specializing in aircraft fault diagnosis and maintenance planning, examines how failures of the smallest of parts have brought down airliners, explaining sometimes esoteric mechanical issues for readers with no technical background. Vividly describing the terror of accidents and close calls, the author then follows the painstaking investigations to determine causes. He focuses on maintenance errors, which rank as one of the top three causes of airline accidents, and points to the factors that have led to an alarming situation-- continued reduction of licensed mechanics, the shutting down of maintenance bases in the United States, and the outsourcing of maintenance to lowballing contractors. Outsourcing has forced thousands of licensed mechanics into retirement or different careers. For those mechanics still employed in the United States, the ever-present threat to their jobs does nothing to cultivate loyalty to an employer and devotion to a task. The Federal Aviation Administration, which should be overseeing quality control, is caught in a conflicted dual role--charged with regulating safety on the one hand and assuring the fiscal stability of airlines on the other. This disturbing wakeup call for improved airline safety standards highlights the critical importance of attention to detail. Porter recommends that the numbers and job security of airline mechanics be increased and that they be vested with an authority level akin to medical professionals.
Donald J. Porter is the author of A Jet Powered Life: Allen E. Paulson, Aviation Entrepreneur; Howard's Whirlybirds: Howard Hughes' Amazing Pioneering Helicopter Exploits, and three other books on aviation. He has also written for Air & Space/Smithsonian and Vertical magazines. As a former product support engineer, one of his specialties involved analyzing why certain parts of aircraft systems had failed. He has appeared on C-Span2's BookTV.