The Art of Basic Drawing: Simple step-by-step techniques for drawing a variety of subjects in graphite pencil (Collector's Series) (Paperback) 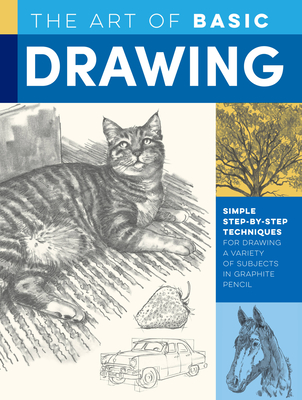 The Art of Basic Drawing: Simple step-by-step techniques for drawing a variety of subjects in graphite pencil (Collector's Series) (Paperback)


In Stock—Click for Locations
Filled with easy step-by-step instruction from a variety of artists and a wealth of inspiring images to study and admire, The Art of Basic Drawing shows beginning artists how to draw everything from flowers and still lifes to landscapes, animals, and people.

You’ll find plenty of helpful tips on choosing the right tools and materials, fundamental drawing techniques, developing value and shading, and setting up an effective composition, as well as important information about the influences of perspective, balance, and texture. Detailed examples of animals, people, flowers, and landscapes will help guide you through the most challenging aspects of drawing almost anything, from basic shapes to realistic details.

Some included pencil drawing projects are:With a striking new design and refreshed, easy-to-understand instruction, this comprehensive drawing guide is the perfect first step for beginning artists. Follow along, step by step, as professional artists reveal their drawing secrets. With practice, you’ll soon be able to capture amazing realism in your own pencil drawings. It’s as easy as 1, 2, 3.

The Collector's Series offers approachable, step-by-step art instruction for a variety of mediums and subjects, such as drawing, oil, acrylic, watercolor, cartooning, calligraphy, and more. Perfect for beginning artists, each title features artist tips for drawing or painting anything and everything from people, animals, and still life to flowers, trees, and landscapes.

William F. Powell was an internationally recognized artist and one of America’s foremost colorists. A native of Huntington, West Virginia, Bill studied at the Art Student’s Career School in New York; Harrow Technical College in Harrow, England; and the Louvre Free School of Art in Paris, France. He was professionally involved in fine art, commercial art, and technical illustrations for more than 45 years. His experience as an art instructor included oil, watercolor, acrylic, colored pencil, and pastel—with subjects ranging from landscapes to portraits and wildlife. He also authored a number of art instruction books, including several popular Walter Foster titles. As a renowned master of color, Bill conducted numerous “Color Mixing and Theory” workshops in various cities throughout the U.S. His expertise in color theory also led him to author and illustrate several articles and an educational series of 11 articles entitled “Color in Perspective” for a national art magazine. Additionally, he performed as an art consultant for national space programs and for several artist’s paint manufacturers. Bill’s work also included the creation of background sets for films, model making, animated cartoons, and animated films for computer mockup programs. He produced instructional painting, color mixing, and drawing art videos.

Michael Butkus was trained at Otis Parsons in Los Angeles and the Art Center College of Design in Pasadena, California. He has taught illustration and rendering techniques, along with character design and visual development, to art industry professionals.

More than 85 years ago, Walter Foster—a well-known artist, instructor, and collector—began producing art instruction books from his home in Laguna Beach, California. He originally wrote, illustrated, printed, bound, packaged, shipped, and distributed them himself. Although Walter passed away in 1981 at the age of 90, his legacy continues in a growing product line. Walter Foster Publishing now provides how-to books and kits to millions of enthusiastic artists worldwide who enjoy the rewards of learning how to draw and paint. People who have never before picked up a paintbrush or drawing pencil have discovered their artistic talents through his easy-to-follow instruction books.

Mia Tavonatti is an artist with a variety of interests, including a strong passion for painting and drawing. She moved from Michigan to California to attend art school at California State University, Long Beach, where she earned her BFA and MFA in illustration. She has also studied painting abroad, and she loves to spend her summers painting in Greece. Mia has exhibited her work extensively, both in Europe and throughout the United States. She is the recipient of numerous scholarships and awards, and her work can be seen on more than 45 book covers and in several magazines. In addition to her illustrative work, she has created a number of murals and commissions for restaurants, private residences, and corporations. She teaches illustration and painting at the Art Institute of Southern California in Laguna Beach and currently resides in Costa Mesa, California.