Sellout: How Washington Gave Away America's Technological Soul, and One Man's Fight to Bring It Home (Hardcover) 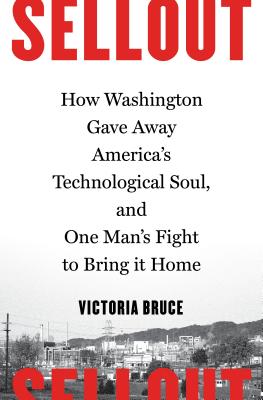 Sellout: How Washington Gave Away America's Technological Soul, and One Man's Fight to Bring It Home (Hardcover)

The story of one citizen's fight to preserve a US stake in the future of clean energy and the elements essential to high tech industries and national defense.

American technological prowess used to be unrivaled. But because of globalization, and with the blessing of the U.S. government, once proprietary materials, components and technologies are increasingly commercialized outside the U.S. Nowhere is this more dangerous than in China's monopoly of rare earth elements-materials that are essential for nearly all modern consumer goods, gadgets and weapons systems.

Jim Kennedy is a retired securities portfolio manager who bought a bankrupt mining operation. The mine was rich in rare earth elements, but he soon discovered that China owned the entire global supply and manufacturing chain. Worse, no one in the federal government cared. Dismayed by this discovery, Jim made a plan to restore America's rare earth industry. His plan also allowed technology companies to manufacture rare earth dependent technologies in the United States again and develop safe, clean nuclear energy. For years, Jim lobbied Congress, the Pentagon, the White House Office of Science and Technology, and traveled the globe to gain support. Exhausted, down hundreds of thousands of dollars, and with his wife at her wits' end, at the start of 2017, Jim sat on the edge of victory, held his breath and bet it all that his government would finally do the right thing.

Like Beth Macy's Factory Man, this is the story of one man's efforts to stem the dehumanizing tide of globalization and Washington's reckless inaction. Jim's is a fight we need to join.

Victoria Bruce holds a master's degree in geology from the University of California, Riverside. She is the recipient of the Alfred I. duPont-Columbia University Award for excellence in broadcast journalism for her film, The Kidnapping of Ingrid Betancourt. Her previous books are No Apparent Danger and Hostage Nation. She lives in Annapolis, MD.

"a compelling narrative. . . . Readers will share Kennedy's considerable frustration with the shortsightedness of profit-driven stakeholders and the hubris of politicians." - Library Journal

"Bruce provides a concise, inspiring story of personal transformation and dedication to American technology production. An instructive tale of one man's 'burning mission to bring back manufacturing and innovation to America.'" - Kirkus Reviews

"A master of her craft, Bruce (Hostage Nation, 2010) combines intellect and a no-nonsense tone to tell a complicated scientific and global story through the lens of one determined man . . . Bruce's thorough work explains the historical context for Kennedy's mine, the evolution of nuclear energy at the Oak Ridge laboratories, and the globalization process, all balanced with Kennedy's biography. This book will, no doubt, spur policy change." - Booklist

"Heart-stopping . . . A gripping disaster story [and] a scathing account of human folly, arrogance, and ambition." - The New York Times Book Review on NO APPARENT DANGER

"Harrowing . . . Offers rich insight into the untidy workings of volcanologists and science in general." - Discover on NO APPARENT DANGER