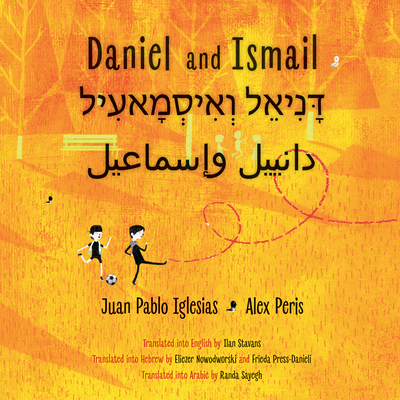 
In Stock—Click for Locations
A one-of-a-kind, uplifting picture book about a Jewish boy and a Palestinian boy who bond on the soccer field—translated into English, Hebrew, and Arabic.

Daniel and Ismail, one Jewish and the other Palestinian, don’t know each other yet, but they have more in common than they know. They live in the same city and have the same birthday, and this year they get the same presents: a traditional scarf—for Daniel a tallit and for Ismail a keffiyeh—and a soccer ball. Taking their gifts out for a spin, they meet by chance on a soccer field, and they soon begin to play together and show off the tricks they can do.

They get so absorbed in the fun that they lose track of time and mix up their gifts: Daniel picks up Ismail's keffiyeh and Ismail takes Daniel's tallit. When they get home and discover their mistake, their parents are shocked and angry, asking the boys if they realize who wears those things. That night, Daniel and Ismail have nightmares about what they have seen on the news and heard from adults about the other group. But the next day, they find each other in the park and get back to what really matters: having fun and playing the game they both love.

Daniel and Ismail is a remarkable multilingual picture book that confronts the very adult conflicts that kids around the world face, and shows us that different cultures, religions, societies, and languages can all share the same page.
Juan Pablo Iglesias is a commercial and civil engineer. His first book, Iguales a 1 (Daniel and Ismail), won the emerging author prize for children’s literature from the Chilean National Council for Arts and Culture.

Alex Peris, graphic designer and illustrator, lives in Santiago, Chile. He has worked for newspapers, magazines, and has illustrated children's books. He is currently preparing his first animated short film based on the Selknam people of Chilean Patagonia.

Ilan Stavans is the Publisher of Restless Books and the Lewis-Sebring Professor of Humanities, Latin American and Latino Culture at Amherst College. His books include On Borrowed Words, Spanglish, Dictionary Days, The Disappearance, and A Critic’s Journey. He has edited The Norton Anthology of Latino Literature, the three-volume set Isaac Bashevis Singer: Collected Stories, The Poetry of Pablo Neruda, among dozens of other volumes. He is the recipient of numerous awards and honors, including a Guggenheim Fellowship, Chile’s Presidential Medal, the International Latino Book Award, and the Jewish Book Award. Stavans’s work, translated into twenty languages, has been adapted to the stage and screen. A cofounder of the Great Books Summer Program at Amherst, Stanford, Chicago, Oxford, and Dublin, he is the host of the NPR podcast "In Contrast."

Eliezer Nowodworski was born in Argentina and has lived in Israel since 1980. He studied history at Tel Aviv University. He works as a translator and interpreter, and his Spanish translations have been published in Spain, Argentina, Peru, and Mexico. Eliezer is a strong believer in multiculturalism and co-existence.

Frieda Press-Danieli was born in Uruguay and has lived in Israel since she was twelve. Frieda studied Drama at Tel Aviv University and Translation at Beit Berl College. She translated several books from Spanish and many movies and series for the Israeli Television. Frieda currently works for Haaretz daily newspaper and teaches Translation at Beit Berl College.
“Peris renders both boys in black-and-white against a colorful background, quietly emphasizing their similarities and evoking the constraints of their communities. The story’s gentle emphasis on the power of play to bridge difference is relatable and persuasive.”
— Publishers Weekly

“...[A]n alter­na­tive fable, one where the joy of friend­ship and the com­fort­ing dreams of their inte­ri­or lives allows Daniel and Ismail to ignore the hatred which threat­ens them…. The book’s end­ing is reas­sur­ing, although not with­out a touch of sad­ness. Jew­ish and Pales­tin­ian chil­dren play togeth­er, both on the field and in their dreams of the future. There is no men­tion of the adults who react­ed with hor­ror at the spon­ta­neous com­pan­ion­ship of two boys with a soc­cer ball on a beau­ti­ful day. Daniel and Ismail is high­ly rec­om­mend­ed for chil­dren and will also be of inter­est to adults who are hope­ful about the future.”
— Emily Schneider

“A multilingual story (Arabic, English, Hebrew) of hope, soccer and friendship between a boy in Israel and a boy in Palestine. A timely and delightful book—perfect for helping children understand larger conflicts. The bright illustrations and artful layout of the text bring an upbeat mood to the pages.”