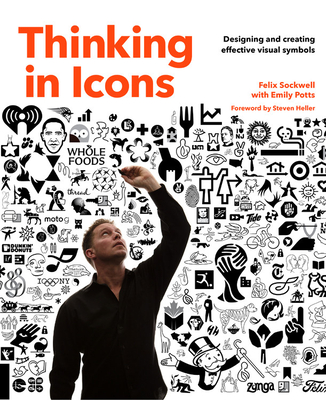 By Felix Sockwell, Emily Potts (With), Steven Heller (Foreword by)

Icons shape the way we see the world around us in business, communication, entertainment, and much more. Now is your chance to learn to speak the textless language of icons with Thinking in Icons.

From the most refined corporate visual systems to the ubiquitous emoji, icons have become an international language of symbols as well as a way to make a wholly unique statement. Without even realizing it, billions of people interpret the language of icons each day, this is the designer’s guide to creating the next great statement.

In Thinking in Icons, artist and designer Felix Sockwell--logo developer for Appleand other high-profile companies, as well as GUI creator for the New York Times app--takes you through the process of creating an effective icon. You will cover many styles and visual approaches to this deceptively complex art.

Sockwell also offers examples of his collaborations with Stefan Sagmeister, Debbie Millman, and other luminary designers. Thinking in Icons also features the work Sockwell has done with an impressive roster of blue-chip international brands, including Facebook, Google, Hasbro, Sony and Yahoo.

Felix Sockwell is an artist, graphic designer, and art director who specializes in the creation of logos, icons and icon systems, murals, and animations. He has worked with many high-profile brands to develop logos and icon systems, and developed the GUI (graphic user interface) for the New York Times iPhone app. He lives in Maplewood, New Jersey. See more of his work at www.felixsockwell.com.

Emily J. Potts has been a writer and editor in the design industry for more than 25 years. In that time she has managed a slew of publications, people, and events. Currently she is an independent writer, editor, and consultant working for a variety of clients in and out of the design industry. She nearly killed Felix during the making of this book. She lives in Peoria, Illinois. www.emilyjpotts.com

Steven Heller was an art director at the New York Times for 33 years, originally on the OpEd Page, and for almost 30 of those years with the New York Times Book Review. Currently, he is co-chair of the MFA Designer as Author Department, Special Consultant to the President of SVA for New Programs, and writes the Visuals column for the New York Times Book Review. He was the recipient of the Smithsonian Cooper-Hewitt, National Design Museum's 2011 Design Mind Award. He writes frequently for Metropolis and other design magazines, and is author, co-author, and editor of over 100 books on design and popular culture. He also writes The Daily Heller blog (imprint.printmag.com/daily-heller). He lives in New York City. Visit him online at www.hellerbooks.com.