Shortest Way Home: One Mayor's Challenge and a Model for America's Future (Paperback) 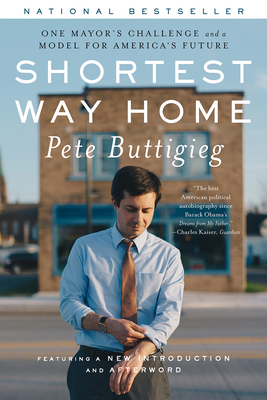 Shortest Way Home: One Mayor's Challenge and a Model for America's Future (Paperback)

Featuring a new introduction and a “Back Home” afterword, Shortest Way Home is Pete Buttigieg’s inspirational story that challenges our perception of the typical American politician.

The meteoric rise of the mayor of a small Midwest city, who defied every pundit’s odds with his electrifying run for the presidency, created one of the most surprising candidacies in recent American history. The fact that his New York Times best-selling memoir, Shortest Way Home, didn’t read like your typical campaign book only added to “Mayor Pete’s” transcendent appeal. Readers everywhere, old and young, came to appreciate the “stirring, honest, and often beautiful” (Jill Lepore, New Yorker) personal stories and gripping mayoral tales, which provided, in lyrical prose, the political and philosophical foundations of his historic campaign.

Now featuring a new introduction and a “Back Home” afterword, in which Buttigieg movingly returns with the reader to his roots in his hometown city of South Bend, Indiana, as well as a transcript of the eulogy for his father, Joseph Buttigieg, Shortest Way Home, already considered a classic of the political memoir form, provides us with a beacon of hope at a time of social despair and political crisis.

Born in Indiana in 1982, Pete Buttigieg is the US secretary of transportation and former mayor of South Bend, Indiana. A Rhodes Scholar and Navy veteran, Buttigieg was educated at Harvard University and the University of Oxford. He and his husband live in South Bend.
Buttigieg’s Shortest Way Home: One Mayor’s Challenge and a Model for America’s Future (Liveright) is the best written of all these books [by 2020 presidential candidates]; it offers the most unembarrassed political hope; and it’s got the best love story.... Buttigieg’s stirring, honest, and often beautiful book is a story of how the people of South Bend rebuilt their Rust Belt city, and made it a better place, and it’s an argument for what it means to answer a calling, and why it’s important to ask, again and again, ‘what each of us owes to the country.'

The best American political autobiography since Barack Obama’s Dreams from My Father.... Buttigieg writes unusually well for a politician.... Is it too much to imagine that America could elect a gay president? I don’t think so.... Especially a man like this.

Personal, beguiling and quite moving as he talks about coming out and getting married… The story is told with brisk engagement — it is difficult not to like him…When Obama wrote his memoir, the idea that the nation would soon put an African-American in the White House seemed beyond the realm of the possible. After reading this memoir written 25 years later, the notion that Buttigieg might be the nation’s first openly gay president doesn’t feel quite as far-fetched.
— Adam Nagourney, New York Times

If you were an early Barack Obama supporter a dozen or more years ago, you recall inching forward in your chair whenever he spoke. The words were so clear, the passion so strong, the message of hope so credible…. I suggest you watch the video of Pete Buttigieg at a CNN town hall. If that piques your interest, as it did mine, read his book, Shortest Way Home.

In a sense, Buttigieg’s book is a kind of antidote to J.D. Vance’s Hillbilly Elegy, a story of broken people in a broken place.... This is a comeback story of a place that got hit hard, survived and then began thriving again.... It’s entirely true that a leap from mayor to president has been impossible in the past. But these pages make a pretty good case that city halls just might be better training schools for the presidency than attendance at any five years of congressional hearings combined.

Readers will find telling insights into the events that shaped Buttigieg's biggest decisions and share a typical day in the mayor's office; relive Buttigieg's tour of duty in Afghanistan (while he was still acting mayor); and understand his angst over being a young, gay public figure trying to get a date (spoiler alert: there's a happy ending!). First and foremost a great, engaging read, this is also an inspiring story of a millennial making a difference.
— Kathleen McBroom, Booklist [starred review]

Since Buttigieg launched his campaign for the presidency last year, I have read or reread much of what he has written, at Harvard and since. Most notable is his excellent memoir Shortest Way Home, with its lyrical evocations of the Indiana landscape, its vivid account of military life in Afghanistan, its rollicking tales of campaign stops featuring Deep Fried Turkey Testicles and peanut-butter-and-bacon sandwiches dusted with powdered sugar, and its incisive analysis of the rewards and frustrations of life as mayor of a small city…. In one of the most powerful passages in Shortest Way Home, Buttigieg points out that there is no formula for resolving the tradeoffs required in government. Data cannot yield answers to questions about who should suffer, and how much, when competing policies are debated.

[Buttigieg] has an extraordinary story and great insights into the politics of our country.
— David Axelrod

Mika and I have been overwhelmed by the reaction Pete Buttigieg got after being on the show. The only other time in twelve years that we heard from as many people about a guest was after Barack Obama appeared on Morning Joe.

Combining candor and compassion with a brilliant understanding of how government can be more effective, Shortest Way Home demonstrates that Pete Buttigieg is not only a key political figure in his generation, but also an appealing and even funny writer. Far from a conventional politician's book, his work is an important entry in the American political tradition for the twenty-first century.

Pete Buttigieg has given more to his community and country before his 40th birthday than most of us do over the course of our lives. At every crossroads, he has turned towards service and leveraged his energy and intellect to help his neighbors and fellow citizens. In this book, you will not only learn about what brings Pete home, but what drives him towards his vision of a better, kinder nation.
— Joe Kennedy III