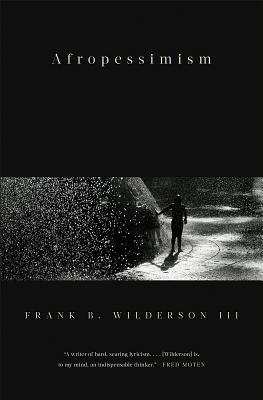 By Frank B. Wilderson, III

Combining trenchant philosophy with lyrical memoir, Afropessimism is an unparalleled account of Blackness.


Why does race seem to color almost every feature of our moral and political universe? Why does a perpetual cycle of slavery—in all its political, intellectual, and cultural forms—continue to define the Black experience? And why is anti-Black violence such a predominant feature not only in the United States but around the world? These are just some of the compelling questions that animate Afropessimism, Frank B. Wilderson III’s seminal work on the philosophy of Blackness.

Combining precise philosophy with a torrent of memories, Wilderson presents the tenets of an increasingly prominent intellectual movement that sees Blackness through the lens of perpetual slavery. Drawing on works of philosophy, literature, film, and critical theory, he shows that the social construct of slavery, as seen through pervasive anti-Black subjugation and violence, is hardly a relic of the past but the very engine that powers our civilization, and that without this master-slave dynamic, the calculus bolstering world civilization would collapse. Unlike any other disenfranchised group, Wilderson argues, Blacks alone will remain essentially slaves in the larger Human world, where they can never be truly regarded as Human beings, where, “at every scale of abstraction, violence saturates Black life.”

And while Afropessimism delivers a formidable philosophical account of being Black, it is also interwoven with dramatic set pieces, autobiographical stories that juxtapose Wilderson’s seemingly idyllic upbringing in mid-century Minneapolis with the abject racism he later encounters—whether in late 1960s Berkeley or in apartheid South Africa, where he joins forces with the African National Congress. Afropessimism provides no restorative solution to the hatred that abounds; rather, Wilderson believes that acknowledging these historical and social conditions will result in personal enlightenment about the reality of our inherently racialized existence.

Radical in conception, remarkably poignant, and with soaring flights of lyrical prose, Afropessimism reverberates with wisdom and painful clarity in the fractured world we inhabit. It positions Wilderson as a paradigmatic thinker and as a twenty-first-century inheritor of many of the African American literary traditions established in centuries past.

Professor and chair of African American studies at the University of California, Irvine, and award-winning author of Incognegro: A Memoir of Exile and Apartheid, Frank B. Wilderson III lives in Irvine, California.
Wilderson’s ambitious book offers its readers two great gifts. First, it strives mightily to make its pessimistic vision plausible. Anyone unconvinced by the vision may find this a dubious contribution, but enough people have been convinced by the view to make an accessible introduction to it a valuable resource just for understanding contemporary intellectual life. Second, the book depicts a remarkable life, lived with daring and sincerity. Afropessimism shares unvarnished glimpses of Wilderson’s childhood, his undergraduate years, his life as a worker and activist between stints in the academy, his graduate studies and their toll on his mental health, his personal relationships, and his experiences as an increasingly well-regarded academic.

[In Afropessimism], a trenchant , funny, and unsparing work of memoir and philosophy, Wilderson makes his most comprehensive case to date about the continued relevance of the Afropessimist worldview. . . . This was already shaping up to be one of the most controversial and insightful releases of the year. Now, with the current public health crisis and looming general election, Afropessimism feels very much like a bellwether of things to come.

A compelling, profoundly unsettling blend of memoir and manifesto that proposes that—by design—matters will never improve for African Americans.... Blending affecting memoir that touches on such matters as mental illness, alienation, exile, and a transcendent maternal love with brittle condemnation of a condition of unfreedom and relentless othering, the author delivers a difficult but necessary argument. Perhaps the greatest value of the book is in its posing of questions that may seem rhetorical but in fact probe at interethnic conflicts that are hundreds, even thousands of years old.... An essential contribution to any discussion of race and likely to be a standard text in cultural studies for years to come.
— Kirkus Reviews [starred review]

Frank Wilderson’s Afropessimism is a brilliant memoir and riveting work of creative non-fiction. He joins the ranks of Claudia Rankine, Saidiya Hartman and Frantz Fanon as one of the boldest and most unflinching theorists of the indispensability—like oxygen to lungs—of anti-Black violence and racism. And nothing since Ursula K. Le Guin’s The Ones Who Walked Away from Omelas has haunted me with the sheer terror of truth that Humanity and the world itself are defined by and feed on Black suffering and death. The greatest challenge in reading this Afropessimist coming-of-age story is seeing a reflection of yourself and finding the will and the words to prove him wrong.

— Khalil Muhammad, author of The Condemnation of Blackness: Race, Crime and the Making of Modern Urban America

[Wilderson’s] writing is powerful, nuanced, and lyrical (“Her hair was white and thin as dandelion puffs,” he recalls of a visit to his aged mother.)... [his] passionate account of racism’s malevolent influence is engrossing.
— Publishers Weekly

There are crucial books that you don’t agree with, but one still comes to understand the importance of the thought experiment. Afropessimism is one of those books.

I am awed by this beautiful and compelling book Afropessimism and its ability to combine a growing up (Black) memoir with Frank Wilderson’s own unerring and poetic interpretation of critical race theory to inexorably install in all the ways that only great story telling can the pithy truth that without Anti Blackness there would be no America. Can you handle that. Can I?

Frank B. Wilderson III both thinks and feels, and profoundly knows the difference. I am not sure that I agree with what he thinks, because frankly, how would I know? But I hope that he is wrong, even though I know that no thinking is wishful. Read this book.
— Fran Lebowitz

What’s most important and so moving about Afropessimism is that Frank B. Wilderson III attends so carefully and devotedly to his own condition of possibility. The persistence of thinking such as Wilderson’s teaches us to believe in the miraculous even as we decry the brutalities out of which miracles emerge.

Frank Wilderson slings piercing stories and scalding analyses with literary fire and intellectual rigor. His tales juke genre and high-step over high-theory mumbo jumbo, and float Franz Fanon some new wings. Like Ralph Ellison’s bluesman, he peers unflinching into the abyss, testifies to its brutal histories and hopeless predicaments, ‘to finger its jagged grain, and to transcend it, not through the consolation of philosophy but by squeezing from it a near-tragic, near-comic lyricism.’ He ghostwrites our brutal pasts into present and still hopeless predicaments, yet divines deep love and blues humor. Even if our own hopes may live elsewhere, we cannot dismiss Afropessimism’s unnerving and undeniable truths, nor the timeless art of its author.

— Timothy B. Tyson, author of The Blood of Emmett Till