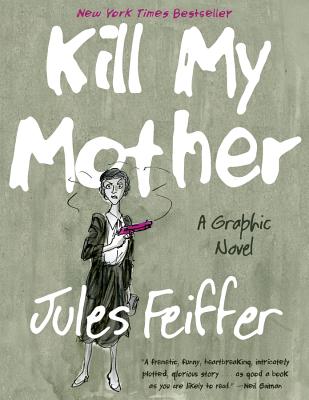 Winner of the Eisner Prize for Best New Graphic Album

Named one of the Best Books of the Year by Vanity Fair, Kirkus Reviews, and Library Journal

When three daunting dolls intersect with one hapless heroine and a hard-boiled private eye, deception, betrayal, and murder stalk every mean street in… Kill My Mother.

Adding to a legendary career that includes a Pulitzer Prize, an Academy Award, Obie Awards, and Lifetime Achievement Awards from the National Cartoonist Society and the Writers Guild of America, Jules Feiffer now presents his first noir graphic novel. Kill My Mother is a loving homage to the pulp-inspired films and comic strips of his youth. Channeling Eisner's The Spirit, along with the likes of Hammett, Chandler, Cain, John Huston, and Billy Wilder, and spiced with the deft humor for which Feiffer is renowned, Kill My Mother centers on five formidable women from two unrelated families, linked fatefully and fatally by a has-been, hard-drinking private detective.

As our story begins, we meet Annie Hannigan, an out-of-control teenager, jitterbugging in the 1930s. Annie dreams of offing her mother, Elsie, whom she blames for abandoning her for a job soon after her husband, a cop, is shot and killed. Now, employed by her husband’s best friend—an over-the-hill and perpetually soused private eye—Elsie finds herself covering up his missteps as she is drawn into a case of a mysterious client, who leads her into a decade-long drama of deception and dual identities sprawling from the Depression era to World War II Hollywood and the jungles of the South Pacific.

Along with three femme fatales, an obsessed daughter, and a loner heroine, Kill My Mother features a fighter turned tap dancer, a small-time thug who dreams of being a hit man, a name-dropping cab driver, a communist liquor store owner, and a hunky movie star with a mind-boggling secret. Culminating in a U.S.O. tour on a war-torn Pacific island, this disparate band of old enemies congregate to settle scores.

In a drawing style derived from Steve Canyon and The Spirit, Feiffer combines his long-honed skills as cartoonist, playwright, and screenwriter to draw us into this seductively menacing world where streets are black with soot and rain, and base motives and betrayal are served on the rocks in bars unsafe to enter. Bluesy, fast-moving, and funny, Kill My Mother is a trip to Hammett-Chandler-Cain Land: a noir-graphic novel like the movies they don’t make anymore.

Jules Feiffer is a cartoonist, playwright, screenwriter, children's book author and illustrator, and member of the American Academy of Arts and Letters. He teaches a humor-writing class at Stony Brook Southampton College and lives in East Hampton, New York.
Jules Feiffer’s Kill My Mother is a tribute to film noir and detective fiction….But Kill My Mother isn’t mere pastiche. The story is a thoughtful meditation on female identity and whether the not-so-simple art of murder can ever be defended as a moral necessity. It is a story about stories, the myths we have to create in order to keep putting one foot in front of the other… I know what I think: Kill My Mother is terrific.

The book is full of the stock characters of the classic noir detective genre—there’s the drunken loser of a private eye, a long-suffering but resourceful widow and her plucky teenage daughter (who also happens to hate her), prize fighters, tough guys chewing on cigars and, of course, a beautiful and mysterious woman. But the characterizations, relationships and, notably, the dialogue he’s created—a Feiffer specialty—are anything but stock in what is shaping up (PW got a sneak peak of the first 60 pages) as a lively and personal recreation of the noir genre in comics form.

The most astonishing plot twist in this hard-boiled musical melodrama chock-full of shifting identities and relationships involves seeing Jules Feiffer—the old master who reinvented the newspaper comic strip in the middle of the twentieth century—now reinvents himself as an ambitious young graphic novelist!

Kill My Mother stretches the long-form graphic novel into formidable textures of compact expression, daring to try things that film noir could only dream of.

Nobody moves like a Feiffer character, and no graphic novel has ever moved like Kill My Mother. Feiffer uses the page like the multimedia genius he is: the camera storytelling of a filmmaker, the body language of stage actors, and the power of punch lines that define his people. Seven decades of pent-up love of noir pours out in these panels.

Multitalented Jules Feiffer has done it all. Winner of a Pulitzer Prize, an Academy Award, an Obie Award, among many others, he’s now turned his spectacular talent to a graphic novel. Nobody writes like Jules! Nobody draws like Jules! Nobody in their right mind would miss reading this monumental milestone of his incredible career!
— Stan Lee

The story is wickedly imagined and deftly plotted, drawing on numerous classic noir influences while including charmingly unique flourishes… Feiffer’s illustrations have a rough-hewn quality, with the jumbled lines of his figures and faces clumping evocatively like Giacometti sculptures, while his human forms move with the fluidity of Degas’ horses across open panels of dancing and boxing. The entire work feels pulled from an earlier time yet explosively modern, a madcap relic animated by an outrageous mind. An unusual, unforgettable, incomparable pulpy punch.
— Kirkus Reviews, Starred Review

Feiffer’s expressive inking seems made for full-length graphic novels, with inventive page layouts and action that practically leaps from panel to panel as the story jumps from the Great Depression to WWII… The 85-year-old legend fixes his material with a fresh and youthful eye, transforming familiar tropes into a crazy kaleidoscope of toxic family history that makes The Big Sleep look like forty winks. You’ll need to read it twice to follow the story—and you’ll want to do it, too.

A fantastic read… Very funny and genuinely moving. Feiffer’s layouts owe much to his mentor, Will Eisner, but his spidery art and absurdist prose are all his own.
— School Library Journal