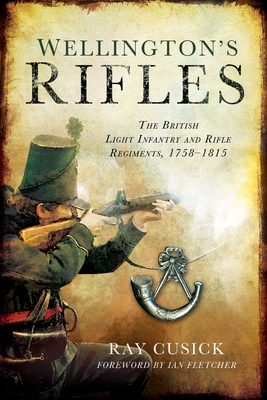 
Special Order—Subject to Availability
Until now there has not been a serious study of the rifle-armed regiments of the British Army that earned such renown in the Peninsular and Waterloo campaigns. Compiled by a former rifleman, Ray Cusick, who has written extensively on the subject, Wellington’s Rifles examines the new rifle regiments, how they came about, their development, and their actions.

The author also investigates the introduction of rifled muskets into the British Army in the French and Indian wars of the eighteenth century, where they were shunned by the military establishment, to their transition into a key element in Wellington’s extraordinarily successful Peninsular army.

The training and tactics of the riflemen are explained and each significant engagement in which they were involved is explored in thrilling detail. It was the riflemen of the 95th Regiment that inspired Bernard Cornewell’s famous series of Richard Sharpe books. That was the fiction—here is the reality. Featuring a foreword by renowned Napoleonic historian Ian Fletcher, Wellington’s Rifles is an authoritative account of the early history of rifle regiments in the British Army.

Skyhorse Publishing, as well as our Arcade imprint, are proud to publish a broad range of books for readers interested in history--books about World War II, the Third Reich, Hitler and his henchmen, the JFK assassination, conspiracies, the American Civil War, the American Revolution, gladiators, Vikings, ancient Rome, medieval times, the old West, and much more. While not every title we publish becomes a New York Times bestseller or a national bestseller, we are committed to books on subjects that are sometimes overlooked and to authors whose work might not otherwise find a home.
Ray Cusick served in the British Rifle Brigade and later in the King’s Royal Rifle Corps with active service spent in the Middle East, principally in Palestine. After the Army, Ray taught art and history before joining the BBC as a designer, where he is perhaps most well known for being the designer of the Daleks from the Doctor Who television series. While at the BBC he developed an interest in writing, particularly on the Napoleonic wars, and eventually had articles published in a variety of magazines including The Age of Napoleon, First Empire, Journal of the Waterloo Association, and the journal of the King’s Royal Rifle Corps. After moving near Horsham, England, he began research on its military past, Horsham barracks, and the Experimental Corps of Riflemen who first mustered there in 1800, eventually being invited to become a Fellow of the International Napoleonic Society. He died in February 2013 at the age of eighty-four.