Promises Betrayed: An Afghan Interpreter at The Fall of Kabul (Paperback) 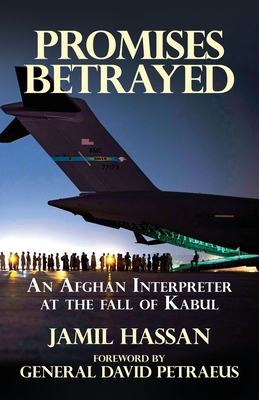 Promises Betrayed: An Afghan Interpreter at The Fall of Kabul (Paperback)

Few operations in the War on Terror in Afghanistan would have been possible without the help of a vital group-Afghan translators and interpreters. While these individuals served alongside our troops, often at significant risk, many did not make it out during the August 2021 withdrawal and are still awaiting evacuation.

One who did manage to escape, however, was Afghan interpreter Jamil Hassan, and this is his story.

Promises Betrayed provides a first-hand account of the evacuation, along with a historical narrative about the war in Afghanistan, all told from the unique perspective of an Afghan ally. Having served as a translator for General David Petraeus and General John Nicholson in Afghanistan meant that Jamil and his family were, and are, high-value targets for possible Taliban retribution.

Like many Afghans, Jamil Hassan believed in what our leaders were selling-the hope for a better life and a better future. He served alongside our troops and worked toward goals anchored on promises made by our country. But in August 2021, those promises were broken. Everything Jamil Hassan-along with countless American and coalition soldiers-worked for, was swept aside during the disastrous August withdrawal. For all intents and purposes, Jamil's home country is now lost, probably forever, and the fate of his friends and family members left behind is tenuous at best.

In the pages that follow you'll read Jamil's minute-by-minute account of how he and his family, by the narrowest of margins, eventually made their way onto a plane and out of Kabul, on August 18, 2021. Promises Betrayed tells the real story of America's "War on Terror" in Afghanistan, and how the Biden Administration's actions failed America, our allies, and most of all, the freedom-loving Afghans who were left behind.

Promises Betrayed tells the real story of the War on Terror in Afghanistan, and how the Biden Administration's actions failed America, our allies, and most of all, the freedom-loving Afghans who were left behind.