Integrative Therapies in Rehabilitation: Evidence for Efficacy in Therapy, Prevention, and Wellness (Hardcover) 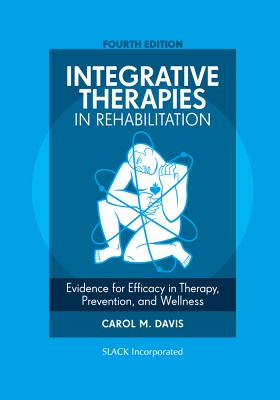 Integrative Therapies in Rehabilitation: Evidence for Efficacy in Therapy, Prevention, and Wellness (Hardcover)


Special Order—Subject to Availability
(This book cannot be returned.)
For more than 20 years, Integrative Therapies in Rehabilitation continues to be a most researched resource on complementary and alternative therapies in rehabilitation. This renowned text, now in its Fourth Edition, relates the updated scientific evidence and the clinical efficacy of integrating what have now become well known complementary and alternative therapies in rehabilitation to successfully improve patient outcomes.

This text has been developed to accompany university courses in complementary and alternative therapies, as a reference manual for clinical practices, and as a resource for those interested in the science behind holistic therapies.

Holistic therapies are those therapies not commonly found in allopathic medicine that are intended to stimulate a therapeutic response from both the body – neuromusculoskeletal and cardiopulmonary systems – and the mind. Integrative Therapies in Rehabilitation, Fourth Edition by Dr. Carol M. Davis is particularly designed for those health professionals who want to understand the scientific foundation and peer reviewed research supporting complementary and alternative therapies.

The Fourth Edition is divided into two parts. The beginning chapters describe the latest cellular biology science and explain the theories put forth on the overall mechanisms of action of the effect of these various therapies on the soft tissue, fascia and nervous systems. The first part also chronicles the advancement of scientific research in the various therapies since the 1980’s to explain, in cellular physiology terms, the outcomes observed by using a number of holistic therapies.

The second part presents various therapies commonly integrated with allopathic therapies in rehabilitation – body work therapies, mind/body therapies, and energy work therapies. The text describes each therapy with a history, cellular mechanism of action, and an up-dated reference section of the evidence of efficacy for the therapy as reported in the literature, often concluding with a case example.

Integrative Therapies in Rehabilitation, Fourth Edition will be the go-to resource for health professionals to understand the scientific evidence and efficacy of complementary and alternative therapies for rehabilitation and improving patient outcomes.

She is an internationally recognized speaker and consultant in teaching and developing curriculum in attitudes and values, ethics, geriatrics, and complementary therapies in rehabilitation. Dr. Davis authored the book Patient Practitioner Interaction: An Experiential Manual for Developing the Art of Health Care, now in its sixth edition, and she coauthored the text Therapeutic Interaction in Nursing with Dr. Christine Williams. These texts were published by SLACK Incorporated.

“The most useful and unique aspect of this book is the detailed discussion of complementary therapies in the context of quantum physics, chemistry, and neurology. As a practitioner and an instructor, I found this book of high quality and highly useful. I plan to study these topics and integrate the information into several of my courses. Although other books cover similar topics, this is the most inclusive and comprehensive one of its type that I have seen. This edition shares the most up-to-date research, terminology, and wisdom with the healthcare community. I highly recommend it to any student, teacher, or practitioner in a health-related discipline.”
-Veronica C. Stern, MS, BCTMB, CSCS, Northwestern Health Sciences University, Doody’s Review Service