Game Misconduct: Hockey's Toxic Culture and How to Fix It (Hardcover) 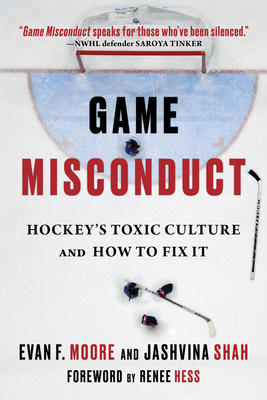 Game Misconduct: Hockey's Toxic Culture and How to Fix It (Hardcover)


Not On Our Shelves—Ships in 1-5 Days
A bracing call to arms for hockey fans, players, and coaches everywhere

Those who have been lured by the sound of skate blades slicing into fresh ice, by the incomparable speed, split-second decisions, and everything-or-nothing attitude of the game know that hockey can seem like its own world. It's all-consuming and exhilarating, boasting its own language and complex morality code.

Yet in another light, that tight community can turn insular; the values of teamwork and humility can manifest as collective silence in the face of abuse and discrimination, issues which have been brought to the forefront of the sport as many share their stories for the first time.

In Game Misconduct, reporters Evan Moore and Jashvina Shah reveal hockey's toxic undercurrent which has permeated the sport throughout the junior, college, and professional levels. They address the topic with a level of passion that comes from being rabid hockey fans themselves, and from experiencing its exclusivity first-hand.

With a sensitive yet incisive approach, this necessary book lays bare the issues of racism, homophobia, xenophobia, bullying, sexism, and violence on and off the ice. Readers will learn about notable players and activists fighting for transformation as well as those beyond the spotlight who are nonetheless deeply affected by hockey's culture of inaction.

Both a reckoning and a roadmap, Game Misconduct is an essential read for modern hockey fans, showing the truth of the sport's past and present while offering the tools to fight for a better future.
Evan F. Moore covers culture and entertainment for the Chicago Sun-Times. He has also written for outlets including Rolling Stone, ESPN's The Undefeated, Huffington Post, and Ebony.

Jashvina Shah is a multimedia reporter covering college hockey and social issues in sports. Her work has appeared in outlets including College Hockey News, espnW, The Globe and Mail, and The Athletic.

Renee Hess is the founder and executive director of Black Girl Hockey Club, a nonprofit organization advocating for Black women in hockey.