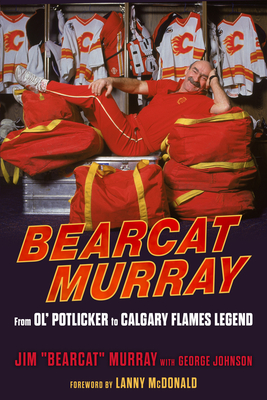 Jim "Bearcat" Murray knows what it means to live and breathe Calgary Flames hockey, and he's carved out his own spot in team history as an unforgettable character. The young man from Okotoks who once dreamed of becoming a jockey found his calling as the Flames' longtime athletic trainer, went on to sip beer from the Stanley Cup, and later was unanimously voted into the Hall of Fame.

Murray now reflects on decades of incredible memories, from the Flames' earliest days after moving to Calgary in 1980 to the glory years of Lanny McDonald and Theo Fleury to the madcap sequence of events that inspired a group of Boston Bruin fans to create The Bearcat Murray Fan Club.

Packed with countless unforgettable gems, this rollicking tour of Flames history is essential reading for all fans.
Jim "Bearcat" Murray spent 16 years as the Calgary Flames' head athletic trainer, including the 1989 Stanley Cup season. Murray is the first person in the history of the Professional Hockey Athletic Trainers Society to be unanimously voted into the Hockey Hall of Fame, and he remains with the Flames as a community ambassador.

George Johnson has chronicled the Calgary Flames since 1984 as a newspaper beat reporter, columnist, and web content writer for the club. He is the author of 100 Things Flames Fans Should Know & Do Before They Die and the co-author of If These Walls Could Talk: Calgary Flames with Peter Maher. He is married to Rita, also a sports writer, and they're the proud parents of Michela and Sabrina.