Payton and Brees: The Men Who Built the Greatest Offense in NFL History (Hardcover) 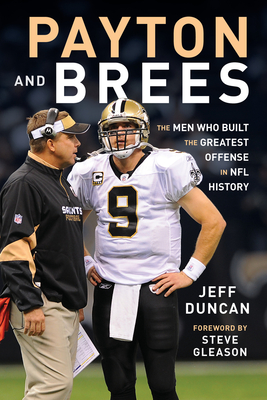 Payton and Brees: The Men Who Built the Greatest Offense in NFL History (Hardcover)

“Perfect for football fans of all stripes, this dual-focus portrait celebrates the winning power of strong bonds between coach and player.” —Publishers Weekly

A rare, behind the scenes  look at the New Orleans Saints over more than 14 seasons

In 2006, Sean Payton arrived in New Orleans as a relatively unknown first time NFL head coach. His task was daunting: resurrect a Saints team that had just finished 3–13 and had won only one playoff game in the previous four decades.

Meanwhile, the city was undergoing its own staggering rebuild following the devastation of Hurricane Katrina five months earlier. Payton knew that to turn around the Saints’ fortunes, he needed to turn around their dreadful quarterback legacy. The Saints targeted a San Diego Chargers castoff they hoped would become the new face of their franchise: Drew Brees.

Every team in the NFL had passed on Brees at least once because of his surgically repaired right shoulder or his lack of prototypical size. But for the Saints, Brees was worth the risk. Together, these two underdogs rolled up their sleeves and got to work, helping rebuild the city as they transformed the franchise from laughingstock to Super Bowl Champions.

What they have done since, including building the most productive offense the NFL has ever seen and setting multiple passing and scoring records, has only deepened their legacy in New Orleans and throughout the league.

Based on more than 14 years of firsthand reporting and dozens of interviews with players, coaches, and executives, Payton and Brees is the definitive account of how Sean Payton and Drew Brees transformed a team, a city, and the game of football.

Jeff Duncan is a columnist for The Athletic New Orleans and previously covered the Saints for the Times-Picayune. He is the author of Tales from the Saints Sideline and From Bags to Riches.
“Payton and Brees is a fine look at a head coach-quarterback pairing that has helped define the NFL for the past fifteen years.” —Football Outsiders

“Awesome read... These 2 gentlemen will be remembered by the city of New Orleans for more than their contribution to turning our team into a winning team but for how the changed the entire city.” —Natasha Tucker, Goodreads