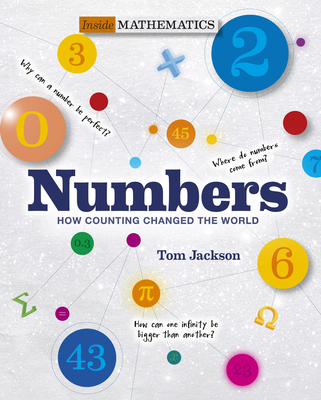 
Not On Our Shelves—Ships in 1-5 Days
Think math is boring? Think again Numbers: How Counting Changed the World cracks open the history of numbers to explore the surprising, fascinating, and sometimes mind-boggling evolution of mathematics through the ages. Did you know that the division symbol is actually a dagger? Or that something as simple as 1, 2, 3, nearly ended up breaking math for good? What is an imaginary number exactly? Numbers may seem simple on the surface but they will defy your imagination. Written to engage, entertain and enthuse readers young and old, Numbers: How Counting Changed the World takes an entirely new approach to the wonderful world of mathematics. Along the way, readers will meet the early geniuses who figured out what numbers are and what we could do with them. They'll learn how numbers influence almost everything around us from the invention of the first computer, to the way we count and experience time itself. And they'll encounter strange and quirky stories about some of math's biggest names. From John Napier, the inventor of algorithms, who never went anywhere without his pet rooster, to Pythagoras, who just might have been a murderer, Numbers: How Counting Changed the World shows that there is much more to numbers than 1, 2, 3.
Tom Jackson is a science writer based in the United Kingdom. Tom specializes in recasting science and technology into lively historical narratives. After almost 20 years of writing, Tom has uncovered a wealth of stories that help create new ways to enjoy learning about science. He studied at the University of Bristol and still lives in the city with his wife and three children.