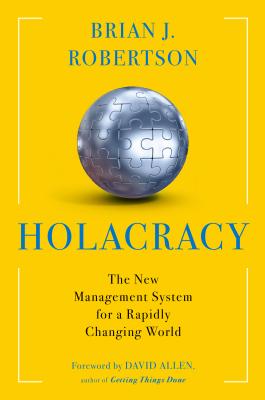 Holacracy is a revolutionary management system that redefines management and turns everyone into a leader.

Holacracy distributes authority and decision-making throughout an organization, and defines people not by hierarchy and titles, but by roles. Holacracy creates organizations that are fast, agile, and that succeed by pursuing their purpose, not following a dated and artificial plan.

This isn't anarchy – it's quite the opposite. When you start to follow Holacracy, you learn to create new structures and ways of making decisions that empower the people who know the most about the work you do: your frontline colleagues.

Some of the many champions of Holacracy include Tony Hsieh, CEO of Zappos.com (author of the #1 New York Times bestseller Delivering Happiness), Evan Williams (co-founder of Blogger, Twitter, and Medium), and David Allen.

Brian J. Robertson created Holacracy and founded HolacracyOne, the organization that is training people and companies all over the world in this new system. Robertson had previously launched a successful software company, where he first introduced the principles that would become Holacracy, making him not just a management theorist, but someone who has successfully implemented a holacracy-powered organization. He lives in Philadelphia.

“Holacracy is the opposite of the cliché way to run a startup. People romanticize startup cultures and their lack of structure, but it actually creates tons of anxiety and inefficiency, whether we have to build consensus around every decision, or deal with land grabs for power. In contrast, Holacracy creates clarity: who is in charge of what, and who makes each kind of decision--and there is a system for changing that, so it's very flexible at the same time.” —Evan Williams, co-founder of Blogger, Twitter, and Medium

“This book reminds me of a book that I must have read 100 times during my quest to become a better poker player. The first reading will most likely result in a complete paradigm shift, and you'll gain new insight every single time you reread it, especially when interspersed with actual practice playing the game on a regular basis. Just like I had a 'poker bible' I constantly referenced and reread, I highly recommend this book as your 'Holacracy Bible' if you're looking to explore a new way of working.” —Tony Hsieh, CEO of Zappos and author of the #1 New York Times bestseller DELIVERING HAPPINESS