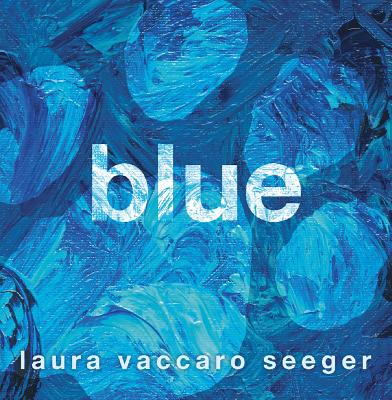 How many shades of blue are there?

There’s the soft blue of a baby’s cherished blanket, the ocean blue of a romp in the waves, the chilly blue of a cold winter’s walk in the snow, and the true blue of the bond that exists between children and animals.

In this simple, sumptuously illustrated companion to Caldecott Honor Book Green, award-winning artist Laura Vaccaro Seeger turns her attention to the ways in which color evokes emotion, and in doing so tells the story of one special and enduring friendship.

Laura Vaccaro Seeger is a New York Times best-selling author and illustrator and the recipient of a 2008 Caldecott Honor, Theodor Seuss Geisel Honors for both 2009 and 2008, a 2007 New York Times Best Illustrated Book Award, and the 2007 Boston Globe–Horn Book Award for Best Picture Book. Her books include First the Egg, The Hidden Alphabet, and Dog and Bear, among others.

Raised on Long Island, New York, Seeger began drawing at two years old and never stopped. For as long as she remembers, she wanted to write picture books. She received her B.F.A. degree at the School of Fine Art and Design at SUNY Purchase in Westchester, New York, and then moved to Manhattan, where she worked as an animator, artist, and editor in the network television business.

Seeger lives in Rockville Centre, Long Island, with her husband, Chris, their two sons, Drew and Dylan, and their dog, Copper. She loves painting, surfing, tennis, playing the piano, and spending time with her family. She takes long walks at the beach every day and paints in her studio every night.

*"Though there is sorrow, it is followed by joy in this touching tribute to a heartwarming relationship that will engage readers of all ages."—School Library Journal, starred review

*"A story full of heart, this works on many levels, assuring satisfying discoveries with repeated viewings."—Booklist, starred review

*"As in Green, small die-cuts lead from each richly textured double-page spread to the next, always surprising, where the canopy of an umbrella becomes the top of a bird feeder, say, an encapsulation of the larger imaginative leaps being made from spread to spread. When was the last time a concept book made you cry?"—Horn Book, starred review

"Seeger’s Green celebrated a single color, and so too does this companion, all the while telling a poignant story."—Publishers Weekly