American Schism: How the Two Enlightenments Hold the Secret to Healing Our Nation (Hardcover) 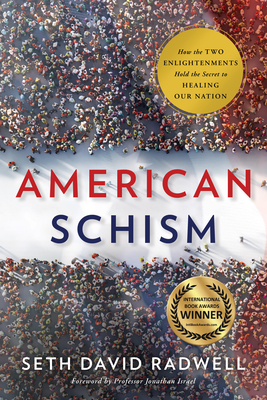 American Schism: How the Two Enlightenments Hold the Secret to Healing Our Nation (Hardcover)

An enlightened exploration of history to unite a deeply divided America

The political dialogue in America has collapsed. Raw and bitter emotions such as anger and resentment have crowded out any logical debate. In this investigative tracing of our nation's divergent roots, author Seth David Radwell explains that only reasoned analysis and historical perspective can act as salves for the irrational political discourse that is raging at present.

Two disparate Americas have always coexisted, and Radwell discovered that the surprising origin of these dual Americas was not an Enlightenment, but two distinct Enlightenments that have been fiercely competing since the founding of our country. Radwell argues that it is only by embracing Enlightenment principles that we can build a civilized, progressive, and tolerant society.

- the roots of the rifts in America since its founding and what is really dividing red and blue America;

- the core issues that underlie all of today's bickering;

- a detailed, effective plan to move forward, commencing what will be a long process of repair and reconciliation.

Seth David Radwell changes the nature of the political debate by fighting unreason with reason, allowing Americans to firmly ground their differing points of view in rationality.

SETH DAVID RADWELL is an internationally known business executive and thought leader in consumer marketing. A common thread across all his leadership and business endeavors has been his passion for our shared democratic values and his interest in American public policy. Mr. Radwell served as president of e-Scholastic, the digital arm of the global children's publishing and education conglomerate. In an earlier role he was president of Bookspan/Bertelsmann, where he was responsible for all editorial, marketing, media, and digital functions for such iconic brands as Book of the Month Club, Doubleday Book Club, and Literary Guild. Until 2018, Mr. Radwell served as the CEO of The Proactiv Company, the leading skincare brand for acne. Previously, he served as president and chief revenue officer of Guthy-Renker, the worldwide leading direct-to-consumer beauty company. Prior to his publishing career, Radwell served as senior vice president, content, for Prodigy Services Company, where he pioneered new ecommerce revenue streams for the online service business. Before that, he spent six years with management consulting firm McKinsey & Company. Seth David Radwell received a master's degree in public policy from Harvard University's Kennedy School of Government. He holds a bachelor of arts degree, summa cum laude from Columbia College, Columbia University. He currently divides his time between New York, Los Angeles, and Paris.